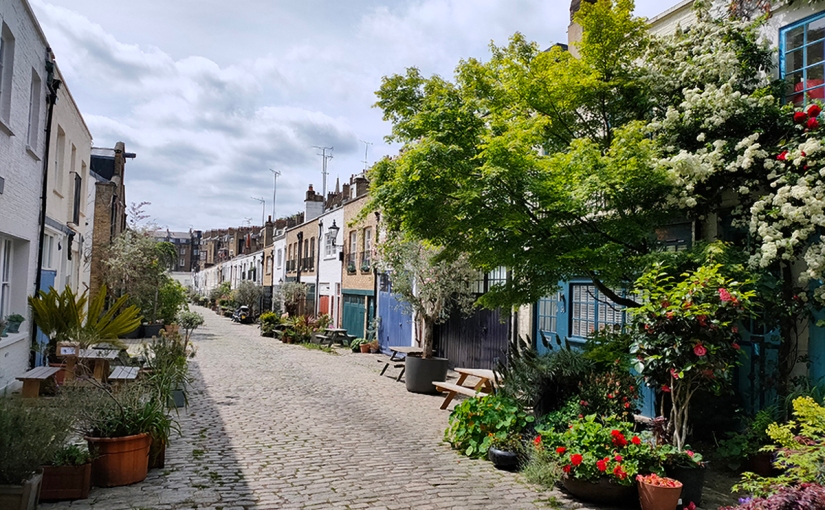 After another lengthy hiatus we’re finally back on the beat and for this trip we’ve moved south from where we finished last time, across the Westway into the area between Paddington Station and the Edgware Road.

We start out on Bayswater Road and head north up Hyde Park Street into the heart of the Hyde Park Estate. This residential district was originally developed in the early 19th century on land owned by the Bishop of London. In 1836 ownership of the freeholds passed to the Ecclesiastical Commissioners (who became the Church Commissioners in 1948). A series of redevelopments from the 1950’s through to the 1970’s saw a number of high density blocks of flats rise up amongst the remaining Victorian villas.

Having circled east on Norfolk Crescent we double back via Oxford Square to reach St John’s Church on Hyde Park Crescent. The church was designed by Charles Fowler (of Covent Garden Market fame) in a 13th century Gothic style and was consecrated in 1832. It has a long history of musical associations and in the 1960’s Beatles’ producer George Martin was invited to sort out the acoustics.

Having circumnavigated Cambridge Square we proceed northward on Southwick Street past a solitary representative of the “Dolphin” lamp posts familiar from the Thames Embankment. Unusually, in this case, the “dolphins” are white rather than black.

Taking a right turn onto Sussex Gardens we pass the Monkey Puzzle Pub. It’s pretty rare to see an example of Araucaria araucana these days so this one was a welcome sight. Also had a sudden memory flash as I recalled meeting an old school friend here for a drink many, many years ago despite this being an area that I have never had any familiarity with.

We resume a northward trajectory on Sale Place, passing Junction Mews, on the corner of which stands a house bearing the sign “Boatmen’s Institution”. In 1828, an organisation known as the ‘Paddington Society for Promoting Christian Knowledge among Canal Boatmen and Others’, purchased a stable and coach house with a view to creating a place of worship for the boatmen who transported goods along the Grand Union canal and their families. As Victorian Society generally looked askance at such families, partly because the boatmen worked on the Sabbath, it was difficult for them to gain acceptance in existing church congregations.

Sale Place is also home to this excursion’s launderette/laundrette of the day. Another example of the latter (mis)spelling.

We make a brief visit to the Edgware Road via Star Street before returning to Sale Place along part of St Michael’s Street. Then we continue north up on to Praed Street where we turn right again just as far as Harbet Road. On the corner here is another pub conversion that gives a flavour of the changing tenor of this part of London.

Harbet Road affords access into Merchant Square, a development built around the eastern end of the Paddington Basin. The first of the six buildings for which planning permission was granted was completed in 2013 and three others have been completed since. The remaining two, including 1 Merchant Square which, at 42 storeys, will be the tallest building in the City of Westminster, are still under construction.

Cutting back on to Harbet Road we swing up to Harrow Road in the shadow of the Marylebone Flyover. We skirt the latter as far as North Wharf Road then follow this as far as Hermitage Street which takes us up to the eastern end of Bishop’s Bridge Road. The bridge itself crosses over the final stretch of the Paddington Arm of the Grand Union Canal which runs from Little Venice down into the Paddington Basin. The Paddington Canal was opened in 1801, with the Basin chosen for its strong onward transportation links. Large furniture depositories arose around the Paddington Basin and its wharves were soon handling huge quantities of building materials, coal, hay, pottery and for the return journey, manure for agriculture and household rubbish to fuel brickyard kilns. However, its heyday was short-lived; within twenty years the Regents Canal had been built allowing goods to be transported from the Grand Union through to the River Thames and the Port of London rendering the Paddington Basin largely redundant.

We drop down from the bridge onto Canalside Walk with its array of modern eateries then nip across into North Wharf Road again following this round to the western end of the Paddington Basin which was redeveloped earlier in the 21st century. On the way back to Merchant Square we pass the Fan Bridge and a statue of Sir Simon Milton, who as Deputy Mayor for Policy and Planning during Boris Johnson’s Mayoral administration, was largely responsible for overseeing the regeneration of the Basin.

Exiting Merchant Square onto Praed Street we turn back west as far as the junction with South Wharf Road. Here stands the one-time Grand Junction Arms, a splendid representative of the former estate of the Truman, Hanbury, Buxton brewing company (1666-ish to 1988). If you look closely you can just about make out the gargoyles. These days it operates as the Fantasia Grill House.

South Wharf Road runs through the middle of St Mary’s Hospital. To the north, abutting the Paddington Basin stands the modern Queen Mother Wing which was opened in 1987 and subsumed the services of Paddington General Hospital.

Across the road is the private Lindo Wing which opened in November 1937, having been financed by businessman and hospital board member Frank Charles Lindo, and has witnessed numerous royal and celebrity births. Amongst these being Princes William and Harry, musicians Elvis Costello and Seal and actor Kiefer Sutherland. The artworks on the windows were created as part of a 2012 exhibition by Julian Opie, perhaps best known for the cover of Blur’s “Best of” compilation in 2000.

At the western end of South Wharf Road we turn left, where, because of the Paddington Square redevelopment on the east side of Paddington Station, the street configuration is different from that shown on either my printed map or Google maps. Since July 2020 a new road called Tanner Lane has fomed the connection with Praed Street and Winsland Street. It’s named after Sir Henry Tanner (1849–1935) the architect who designed the former Royal Mail sorting office on London Street which was demolished in 2018 to accommodate the Renzo Piano designed new development. During its period of vacancy from 2010 the Sorting Office moonlighted as a culture venue, hosting Punchdrunk’s 2013, A Drowned Man, and acting as a staging post for the 2012 Olympic Games. One small silver lining to its destruction is the view temporarily afforded of Paddington Station’s majestic Tournament House (1935).

Moving back east along Praed Street we approach the The Clarence Memorial Wing, of St Mary’s Hospital which was designed by Sir William Emerson and opened in 1904.

It was here that Alexander Fleming (1881 – 1955) discovered penicillin by happy accident in 1928. On 3 September that year he returned to his laboratory having spent a holiday with his family at Suffolk. Before leaving for his holiday, he had inoculated staphylococci on culture plates and left them on a bench in a corner of his laboratory. On his return, he noticed that one culture was contaminated with a fungus, and that the colonies of staphylococci immediately surrounding the fungus had been destroyed, whereas other staphylococci colonies farther away were normal, famously remarking “That’s funny”. He was able to identify the mould as belonging to the genus Penicillium. Fleming’s laboratory has been restored and incorporated into a museum about the discovery and his life and work, however the museum has not as yet re-opened post-pandemic.

On the other side of Norfolk Mews is the original incarnation of St Mary’s Hospital in Norfolk Place which was designed by Thomas Hopper in a classical style. It first opened its doors to patients in 1851, the last of the great voluntary hospitals to be founded. Among St Mary’s founders was the surgeon Isaac Baker Brown, a controversial figure who performed numerous clitoridectomies at the London Surgical Home, his hospital for women. Since 2008, St Mary’s has been operated by Imperial College Healthcare NHS Trust and the Norfolk Place site now forms one of the campuses of Imperial College’s Faculty of Medicine.

Beyond St Mary’s we turn south off Praed Street into Junction Place then swiftly make a right into another section of St Michaels Street. At the junction with Bouverie Place the pub named after Alexander Fleming sits as inactive as the museum. The Iraqi restaurant opposite appears to be flourishing on the other hand.

A combination of Star Street, Rainsford Street, Southwick Mews and Norfolk Place return us to Praed Street where we head west as far as Paddington Station before turning south again on London Street and almost immediately veering off into Norfolk Square. This is one of the few squares in the vicinity accessible to the public, which might be connected to the fact that the majority of the mid nineteenth century stuccoed terrace houses that surround it are now mid-range hotels (though that might be a slightly generous description). In any event nos. 2 to 22 have a Grade II listing.

After a circuit of the square, London Street drops us down onto Sussex Gardens. The section from here east as far as Radnor Place is equally well endowed with, well let’s call them budget plus, hotels.

Just off Radnor Place, Radnor Mews is a rare example of a mews with vehicle access at either end. There was a certain amount of rebuilding following WWII bomb damage but a number of original buildings survive nearer to the Sussex Place entrance.

On the other side of Sussex Place is Bathurst Mews which like Radnor Mews originally provided stables for the larger properties in Gloucester Square and Sussex Gardens. However, unlike Radnor and, indeed, any other mews in London, Bathurst is still home to working stables. Hyde Park Stables and Ross Nye Stables are both at the western end of the Mews from where they offer horseback excursions into Hyde Park. As you can see below left, some of the residents at the eastern end have excelled themselves on the horticultural front.

We exit Bathurst Mews onto Bathurst Street the proceed east through Sussex Square, Clifton Place, Gloucester Square and Somerset Crescent all the way back to Hyde Park Crescent and St John’s Church. Then we wend our way back west via Southwick Place, Hyde Park Square and Strathearn Place to arrive at today’s pub of the day, The Victoria on the corner with Sussex Place. A beautiful Victorian pub, dating from around 1864, The Victoria is a Grade II listed building with an interior than retains its original counter with panelled bays divided by fluted pilasters and a regency-style fireplace. The Theatre Bar, upstairs, has ornate fittings imported from the Gaiety Theatre about 1958. It was Fuller’s pub of the year in both 2007 and 2009 and does a mean club sandwich.

Beyond the consulate we turn right into Clarendon Place which drops us onto the Bayswater Road. On the way we pass Chester House designed and lived in (from 1926 to 1960) by, our old friend, Sir Giles Gilbert Scott (1880 – 1960). GGS is, of course, the man who brought us the red telephone box and both Battersea and Bankside Power Stations (the latter now Tate Modern).

We follow Bayswater Road west as far as Westbourne Street from where detour off to loop round Stanhope Terrace, Sussex Square and Bathurst Street before continuing up to the western end of Sussex Gardens. Turning east we circumnavigate Talbot Square, another one with rare public access to its gardens, before making our way back to Praed Street via Spring Street and Conduit Place.

We end today’s excursion opposite Paddington Station, which has seen enormous changes in recent times due to its participation on the Elizabeth Line. But we’ll delve into that next time.