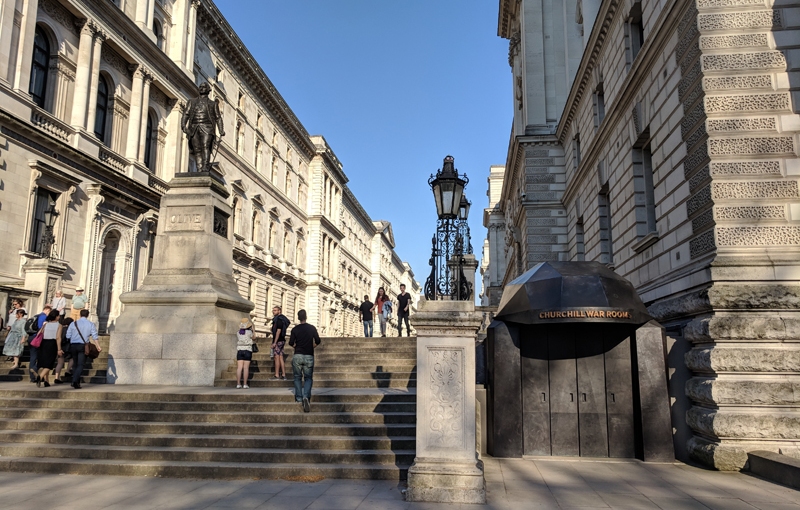 Second leg of this one resumes outside New (Old New) Scotland Yard on the Victoria Embankment, proceeds down to Westminster tube, goes up Parliament Street and Whitehall past Downing Street and cuts through Horse Guards Parade before finishing at the Mall. 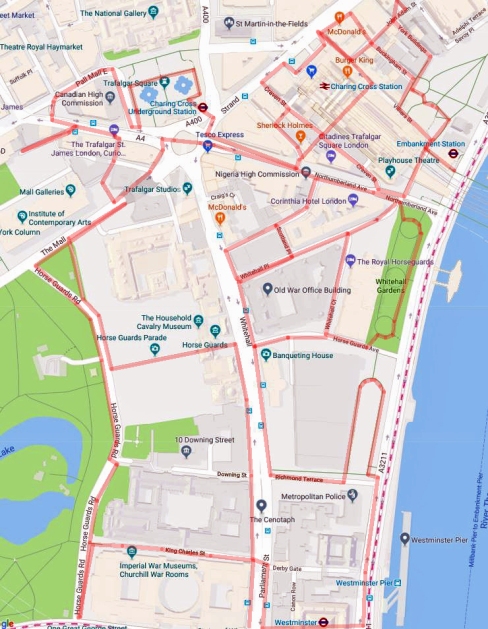 I had hoped to take a look at the Crime Museum (aka The Black Museum) attached to New Scotland Yard but it turns out it’s only accessible to serving police officers. So with the river on my left I walk down the Victoria Embankment to Westminster Tube and then turn right up Westminster Bridge Road towards Parliament Square. Heading away from the square north up Parliament Street on its west side the next major government building that comes our way is HMRC (Her Majesty’s Revenue & Customs). This stands back to back with HM Treasury (of which more later) as part of a complex of government buildings developed between 1908 and 1917, originally called the New Public Offices but later referred to as GOGGS (Government Offices Great George Street). Great George Street flanks the southern side of the buildings. 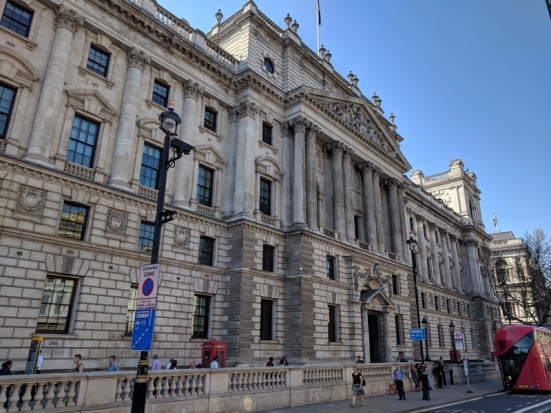 Across the road is the Red Lion pub which is the closest hostelry to Downing Street, though the last sitting Prime Minister to pop in for a drink apparently was Edward Heath. Less surprising is the fact that Charles Dickens was a regular back in the day (since just about every pub in central London claims the old literary boozehound as a one-time habitué).

The next block up, standing to the west of the cenotaph where Parliament Street changes into Whitehall, is home to the Foreign and Commonwealth Office. This was completed in 1868 and was designed by Sir George Gilbert Scott (1811 – 1878) who was later responsible for the Midland Hotel at St Pancras (see Day 9).  Scott designed the new Foreign Office as ‘a kind of national palace or drawing room for the nation’ with the use of rich decoration to impress foreign visitors. The building is adorned with a series of sculptural reliefs which, in typical Victorian fashion, take the form of a woman with her top at least half off accessorised to represent either a geographic area or a high concept. So in these creations of H.H Armistead and J. Birnie Philip we have Australia, Africa, America, Asia and Europe (more modestly depicted than the others of course) along with Education, Government, Law, Literature, Agriculture, Manufacture and Commerce. And I didn’t choose this one so I could make some cheap jug-based quip – it just happened to be the easiest to photograph. 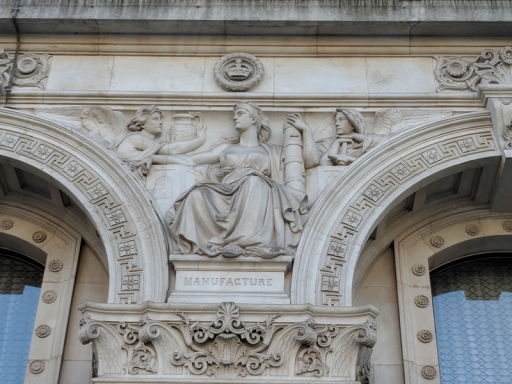 Which brings us to Downing Street and something of a breakdown in the mission because, since 1989, access to the street has been blocked by a security checkpoint and it has been patrolled by armed police since the IRA mortar bomb attack of 1991. The street is named after the diplomat George Downing (1624 – 1684) who had the street and its houses built in the 1680’s. Described by the official Government website as unpleasant, miserly and brutal, Downing came to prominence under Cromwell and then switched allegiance with alacrity when the Restoration became inevitable. For his assistance in purging many of his former Parliamentarian allies he was knighted by Charles II in 1660. The first Prime Minister to take up residence at no. 10 was Sir Robert Walpole in 1735, it having been presented to him by King George II. It was used on and off by subsequent 18th century Prime Ministers more as an office than as a home. Viscount Goderich engaged Sir John Soane to do a makeover on the house in the 1820’s but this didn’t tempt any of his immediate successors to move in. And although no.11 was made the official residence of the Chancellor of the Exchequer in 1828 the surrounding area became increasingly seedy and demolition looked a real possibility. However during the era when Disraeli and Gladstone traded the premiership the house was refurbished and modernised several times. It was later fully renovated during the 1950’s and again in the Thatcher and Blair years. The IRA mortar bomb mentioned above was fired from a white transit van in Whitehall and exploded in the garden of Number 10, only a few metres away from where then PM John Major was chairing a Cabinet meeting to discuss the Gulf War.

We’ve passed over many of the statues and memorials on Whitehall but I quite admire this equestrian bronze of Field Marshal Earl Haig (1861 – 1928), a 1936 work of Alfred Hardiman. At the time, however, it aroused considerable controversy on account of the riding position and the stance of the horse. Earl Haig commanded the British Expeditionary Force on the Western Front during WW1 including during the Battle of the Somme which saw the highest number of casualties in British military history. Although treated as a national hero in the aftermath of the war subsequent reappraisals of his wartime strategies have earned him the soubriquet “Butcher of the Somme”. Bizarrely there is a football club in Argentina named after him. Club Atletico Douglas Haig was founded in 1918 and currently plays in the second tier of Argentinian football.

We continue a short way further up Whitehall and turn left to pass through the central arch of the Horse Guards building to get to Horse Guards Parade. The first building on the site was commissioned by Charles II in 1663 but the current one dates from the reign of George II. The originally commissioned architect for the new building, William Kent, more or less retained the plan of the original with its clocktower, courtyard and two oversize sentry boxes but utilised the then fashionable Palladian style of architecture. The Duke of Wellington was based here while Commander in Chief of the British Army. The building is still in use by the military and also houses the Household Cavalry Museum (gave that one a miss). There are a lot of jobs I don’t envy people having to do but standing for hours in full military regalia while gurning tourists act the prat in front of you must be high up on the list. 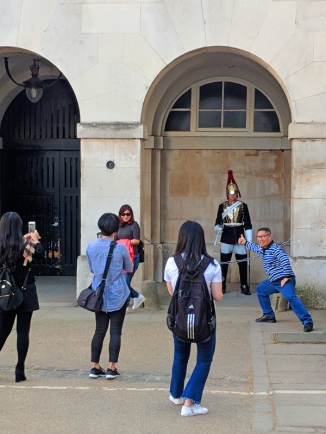 Horse Guards Parade occupies the site of the old Palace of Whitehall’s tiltyard where jousting tournaments were held in the time of Henry VIII. For much of the 20th century is was used as a car park for civil servants but following that mortar attack a review of security arrangements recommended that it be restored to public use. So in 1996 it was resurfaced and a year later car parking banned (apart from tourist coaches apparently). Horse Guards Parade notoriously hosted the beach volleyball tournament during the London 2012 Olympics.

Circling around the Parade we arrive on Horse Guards Road to the east of St James’s Park and head north back up to the Mall. We turn right towards Admiralty Arch as far as the bronze statue of Captain James Cook (1728 – 1779), by Thomas Brock and erected in 1914, before doubling back. Cook, born the son of a farm worker, is one of the most remarkable examples of 18th century social mobility. After his success in exploring and mapping the Antipodes, Cook’s luck ran out on his third voyage to the South Pacific when a dispute with Hawaiian islanders escalated to the point where he tried to take a local leader hostage and in the ensuing melee was stabbed and killed.

Incidentally, the flag on the left there is that of Mozambique, one of the many put up along the Mall for the meeting of the Heads of Commonwealth. As you can see it includes an image of an AK-47 rifle – meant to represent defence and vigilance. It’s one of three national flags to feature a firearm, the others being Guatemala and Luxembourg (only kidding it’s actually Haiti). In 2005 a competition was held to design a new flag; a winner was selected from 119 entries but rejected by the ruling government.

So we head right down to the southern end of Horse Guards Road and HM Treasury which occupies the western side of GOGGS (hopefully you were paying attention earlier) and has been based here since 1940. The royal treasure was originally located in Winchester, and was moved to the Whitehall area following the Norman Conquest. The Treasury then operated from the Exchequer Receipt Office in Westminster Cloisters until the Restoration in 1660. On ascending to the throne Charles II, perhaps wanting to keep a close eye on his finances, allocated it rooms in Whitehall Palace. In 1698 a huge blaze, caused by a servant airing some linen too close to the fire, destroyed all of the Palace but the Banqueting House (see last post) and Cardinal Wolsey’s wine cellar which is now under the Ministry of Defence building. Following the fire, the homeless Treasury moved to Henry VIII’s former Cockpit (near today’s Horse Guards Parade). Then in 1734 a new Treasury was built by William Kent on Horse Guards and this was later joined by an adjacent expansion building designed by John Soane. Both those buildings were severely damaged by bombs in 1940 prompting the move to GOGGS.

In the north-west corner of GOGGS you can visit Churchill’s Cabinet War Rooms. In the build–up to the Second World War, the government began looking for a strong basement in which a map room and a Cabinet Room could be constructed without major alterations. The basement of GOGGS was chosen, not only because it was convenient for Downing Street, but because its concrete frame 2 would help prevent the collapse of the building if it received a direct hit from a bomb. Initially, only a few rooms were commandeered but when Horse Guards was bombed on October 14, 1940, wrecking parts of 10 Downing Street, all Churchill’s staff moved into GOGGS. After the war the War Rooms were left in aspic, with access restricted to small groups and strictly regulated, until the Imperial War Museum took them over and opened them up to the public in 1984.

The entrance to the War Rooms is located at the western end of King Charles Street which intersects GOGGS (I may have overdone that particular acronym just a tad) and the Foreign Office. In the middle of the steps leading up to the street stands a statue of Robert Clive (aka Clive of India) (1725 – 1774) by John Tweed which was positioned here in 1916 having been unveiled outside what is now the Welsh Office on Whitehall four years earlier. Clive is indelibly associated with the British East India Company and its excursions into India, laying the foundations for the establishment of the Raj. His finest hour came in 1756 when, having just been appointed as a Lieutenant Colonel and Deputy Governor of Fort St David, he re-took the city of Calcutta from the Nawab of Bengal, Siraj ud Daula, with just 3,000 men against the Nawab’s 68,000-strong French-backed army. This led to release of 23 out of 146 captured Britons held in the so-called “Black Hole of Calcutta”, a cell just 18 feet square. Though that doesn’t necessarily compensate for his overall impact on Anglo-Indian relations.

At the other end of King Charles Street is a triumphal arch connecting the Foreign Office and Treasury buildings erected in 1908 and incorporating a frieze by sculptor Paul Montford of nine figures representing trade and travel by sea. 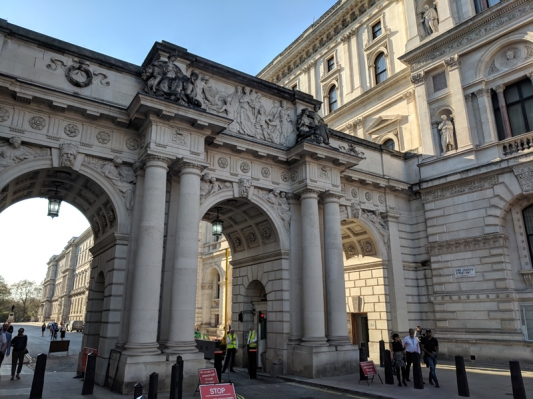 And so with just a short stroll back to Westminster tube station to finish that’s Whitehall and its surroundings done and dusted. Next time it’s the turn of Parliament.