Another compact itinerary today; starting out at St Clement Danes Church on the Strand, dropping down to visit Two Temple Place  and then meandering through the labyrinth of courts and squares that comprise the two Inns of Court, Middle Temple and Inner Temple.

St Clement Danes Church sits on its on island in the middle of the eastern end of the Strand just across from the Royal Courts of Justice. Approaching from the rear end we first make the reacquaintance of Dr Samuel Johnson (see last post) and then moving round to the front entrance find statues to two of Britain’s wartime RAF leaders, Sir Arthur “Bomber” Harris (1892 – 1984) and Sir Hugh Dowding (1882 – 1970) along with a memorial to Prime Minister W.E Gladstone (1809 – 1898) erected in 1905.

The church traces its origins back to the 9th century when Danish settlers (converted to Christianity) took over an Anglo-Saxon church dedicated to St Clement which then became known as St Clement-of-the-Danes. It was first rebuilt in the time of William the Conqueror, again in the 14th century and then after the Great Fire by Sir Christopher Wren (the fire didn’t reach this far but the church was in such poor condition that it was decided to knock it down anyway). The new church was completed in 1681 but the steeple, designed by James Gibbs, was only added in 1719. It had to be reconstructed again after WW2 when German bombs spared only the steeple and part of the walls. That work was instigated in 1956 by the RAF and two years later St Clement Danes was reconsecrated as its official church.

We head south from the church down Arundel Street (for a second time) and at the bottom cross over into the Temple (and final) section of Victoria Embankment Gardens. Here stands a statue to John Stuart Mill (1806 – 1873) the great philosopher and liberal thinker. Mill was one of the foremost proponents of utilitarianism (along with Jeremy Bentham) – simplistically “the greatest good of the greatest number”. He was also the first member of Parliament to advocate women’s suffrage.

The other eminent Liberal commemorated in the gardens is William Edward Forster (1818 – 1886). He was the guiding force behind the Elementary Education Act of 1870 which established for the first time a framework for primary education of all children from the age of 5 through to 12.

Exit the garden into Temple Place opposite Globe House, the HQ of British American Tobacco (BAT), owners of the Dunhill and Lucky Strike cigarette brands (inter alia). BAT had turnover of around £14bn in 2016 and is the sixth largest company by capitalisation in the FTSE 100 (yes there’s still plenty of money to be made out of fags people). 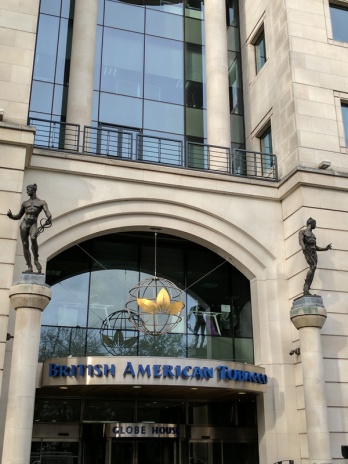 A few steps further along and we arrive at Two Temple Place. This was built, entirely of Portland stone, between 1892 and 1895 for William Waldorf Astor, the man behind the Waldorf hotels and one of the richest people in the world at the time (as mentioned a couple of posts back). Incredibly, this faux Elizabethan/neo-Gothic creation of architect John Loughborough Pearson with its opulent interior, was originally primarily  intended to serve as Astor’s estate office – though he did eventually use it as his London residence. The man responsible for the interior decoration, after the French Renaissance style, was John Dibblee Crace, who also decorated Cliveden for Astor.

The building is now looked after by registered charity, the Bulldog Trust and, in addition to its use as a venue for corporate and private entertaining, hosts regular high-profile exhibitions. The latest of these, Sussex Modernism: Retreat and Rebellion runs to 23 April 2017 and well worth a visit.

The main staircase is embellished with seven mahogany carvings by Thomas Nicholls representing characters from The Three Musketeers and Nicholls continues the literary theme with a frieze around the first floor gallery depicting 82 of Shakespeare’s dramatis personae and another in the main hall incorporating characters from Rip Van Winkle, The Scarlet Letter and The Last of the Mohicans. The entrance door to the Great Hall is made of mahogany, has a beautifully carved head and nine decorative panels in silver gilt by Sir George James Frampton which portray the nine heroines of the Arthurian Legend according to the version by  Thomas Malory. Guinevere is depicted in the central panel.

After leaving Two Temple Place head round the back of the building and up Milford Lane before swinging right into Little Essex Street and then turning south again down Essex Street. This is the western edge of Middle Temple, the third of the three Inns of Court established in the 14th century we have visited (Gray’s Inn and Lincoln’s Inn being the first two).  The Inn’s name derives from the Knights Templar who were granted this site in the latter part of the 12th century. After the fall of the Crusading Orders’ strongholds in the Holy Land in 1291 the Knights Templar retreated to Cyprus and their fortunes continued to wane thereafter. The lands south of Fleet Street then passed for a time to the Order of the Hospitallers (aka The Order of St John) whom we have encountered previously. Come the Reformation the land was seized by the Crown and divided between the newly formed Inns of Middle Temple and Inner Temple.

Down the steps back into Temple Place and then along the Embankment, skirting Middle Temple Gardens, before entering into the heart of the Inn via Middle Temple Lane.

Middle Temple Hall is probably the finest example of an Elizabethan Hall in London. It is 101 feet long and 41 feet wide, and spanned by a magnificent double hammer-beam roof. Begun in 1562 when Edmund Plowden, the famous law reporter, was Treasurer of the Inn, it has remained little altered up to the present day. The High Table, believed to be a gift from Elizabeth I., is 29 feet long and made from a single oak tree which was floated down the Thames from Windsor Forest. The first recorded performance of Twelfth Night took place in the Hall on 2nd February 1602 and you won’t be surprised to learn that it’s in constant demand as a film location – everything from Bridget Jones II to Shakespeare in Love. If you’re not short of a bob or two you can also hold your wedding reception here.

Wend our way through Fountain Court then south past the various Chambers before emerging back onto Essex Street and heading back up to the Strand. On the way we pass the Edgar Wallace pub which in its original guise of the Essex Head, dating back to 1777, was another of Samuel Johnson’s haunts. It was renamed in 1975 in honour of the centenary of the eponymous crime-writer’s birth. Wallace was also a prolific screenwriter, principally for RKO. He penned the first draft of the script for King Kong but never got to see his efforts on the screen; dying of a combination of diabetes and double pneumonia a year before the film (based on a reworked script) was released.

Just around the corner where the Strand morphs into Fleet Street is another historic pub, the George. Originally founded as a Coffee House in 1723 the George became a public house early in the 19th century. One regular visitor back then, along with the ubiquitous Dr Johnson, Oliver Goldsmith and Horace Walpole, was the con-man Henry Perfect who had a propensity for impersonating vicars. The building was reconstructed in the late Victorian era (that exterior is only mock-Tudor). Reputedly there is a carving depicting a naked man chasing pigs somewhere on or inside the pub but this eluded me. 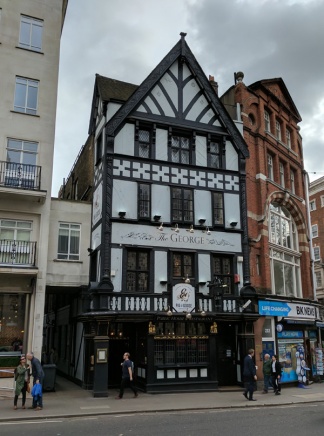 Turn right almost immediately down Devereux Court which is where the Instituto Cervantes, the Spanish cultural centre, is tucked away. 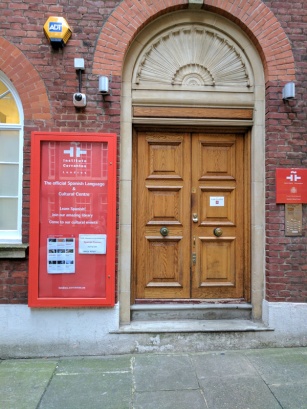 Wend our way back through the heart of Middle Temple then escape back up to Fleet Street through an archway and up a set of steps which lead to the building known as Outer Temple. This was erected as an office building in Victorian times and although it is thought there may have been an Inn of Chancery called Outer Temple prior to the 16th century it had nothing to do with this location, so the name was purely taking advantage of the proximity to the Temple Inns. The building is now used as a branch of Lloyds Bank, almost certainly the most extravagantly decorated one in the country. I definitely doubt you’ll come across ATM’s with more luxuriant surroundings than the two in the entrance here.

A short way further east on Fleet Street is the Temple Bar memorial. The memorial marks the spot where Wren’s Temple Bar (more on that to come in a later post) used to stand, as the ceremonial entrance to the City of London from Westminster . The bronze free-standing statues of Queen Victoria and the Prince of Wales, facing the road on each side, are by Sir Joseph Boehm. They are celebrated here because in 1872 they were the last royals to pass through the old gate, in order to attend a thanksgiving service at St Paul’s Cathedral for the Prince’s recovery from typhoid. The rampant “griffin” (as it is traditionally known) crowning the Temple Bar Memorial is really a dragon, the symbol of the City of London.

On the south side of Fleet Street adjacent to the memorial is a plaque commemorating the site of the Devil Tavern which was demolished in 1787. This was renowned as the home of the Apollo Club, a literary dining society founded by the Elizabethan playwright Ben Johnson .  Members of the club are said to have included Shakespeare, Swift, Pope and (yet again) Dr Johnson (no relation) – he did get about.

Head south towards the river down Middle Temple Lane once more and after a circuit of Essex Court on the west side switch to the east side and Pump Court which takes us in to Inner Temple territory.  Inner Temple suffered the ravages of the Great Fire far worse than Middle Temple and many of the few original buildings that survived were lost to subsequent fires and 20th century war damage. Consequently, the Hall, Treasury Office, Benchers’ Rooms and Library were all reconstructed after World War II.

After a tour of Hare Court, Elm Court and Crown Office Court we arrive at the Temple Church itself. The church, founded by the Knights Templar as already noted, is in two parts: the Round and the Chancel. The Round Church was consecrated in 1185 by the patriarch of Jerusalem. It was designed to recall the holiest place in the Crusaders’ world: the circular Church of the Holy Sepulchre in Jerusalem. The Chancel dates from the 1230’s. The Temple served as the London headquarters of King John and it was here in January 1215 that the barons confronted him for the first time with the demand that he subject himself to the rule of a charter, which ultimately lead to the signing of the Magna Carta later that same year. Although the church survived the Great Fire unscathed it was refurbished by Sir Christopher Wren shortly thereafter. A couple of centuries later the Victorians carried out work to try and restore the church to its original appearance but most of that was destroyed in the Blitz. Post-war restoration wasn’t completed until the second half of the 1950’s. By a stroke of good fortune the architects, Walter and Emil Godfrey, were able to use the reredos designed by Wren for his 17th-century restoration. Removed in 1841, it had spent over a century in the Bowes Museum, County Durham.

Return to Fleet Street via Inner Temple Lane then head east as far as Old Mitre Court which takes us back into the heart of the Inner Temple and segues into King’s Bench Walk, named after the King’s Bench Office which was based there until the 19th century.  This row which contains the Inner Temple’s best preserved chambers buildings, which date from the 17th century.

And that’s where we end things for today before shuffling back to Fleet Street for a couple of glasses of the old fermented grape juice in El Vino’s.