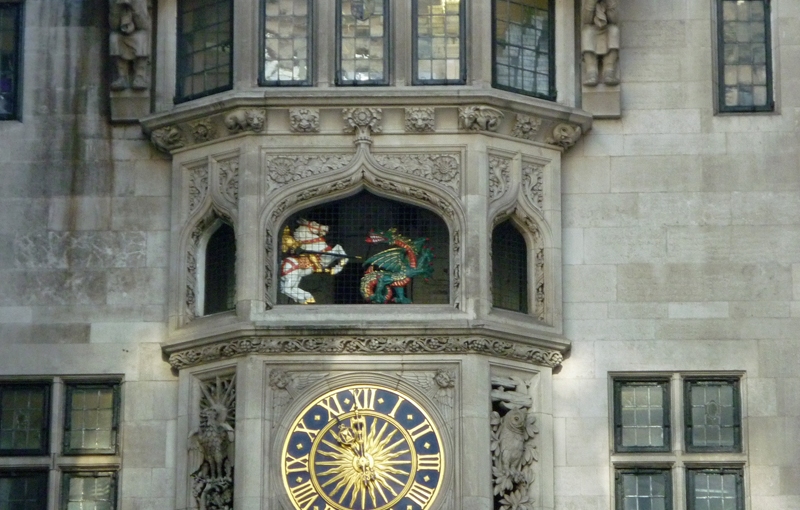 Today’s route is a necessarily brief one as I’m still recovering from a sprained ankle which has kept me off the streets (so to speak) for the last couple of weeks. Still there’s plenty to report on as we make our first foray into Soho (settle down it’s not the Seventies), including Liberty’s department store and the Photographer’s Gallery.

We start out today at Oxford Circus tube station, the busiest on the London Underground network. Based on exponential growth in the first few years of this decade it would have seen more than 100m comings and goings in 2015. The Central Line was the first line to pass through here, opening in 1900 and originally just running from Shepherds Bush to the City. The Bakerloo followed in 1906 and the Victoria not until 1969.

From the station we head south down Argyll Street the site of the London Palladium.

The Grade II-listed Palladium was built in 1910 and is probably best known as the venue for that unmissable cavalcade of top flight family entertainment that is the annual Royal Variety Show. After WWII the legendary Val Parnell took over as manager of the theatre and introduced a policy of showcasing big-name American acts at the top of the bill – the likes of Bob Hope and Frank Sinatra. One British performer who managed to steal back some of the limelight was the immortal Bruce Forsyth who hosted ITV’s Sunday Night at the London Palladium extravaganza during the sixties. The Beatles played here in 1963 and Slade ten years later when the balcony nearly collapsed. Marvin Gaye’s 1976 concert here was recorded and released as a double live LP.

At the end of Argyll Street we turn right on Great Marlborough Street past Liberty department store (which we will return to later). Turning left onto Kingly Street we pass beneath the three storey arched bridge into which is set the Liberty clock.  The clock was restored to its former glories in 2010 so that every quarter of an hour St George chases the Dragon around the clock, and on the hour raises his sword to smite the beast with each chime.  The inscription beneath the clock reads “No minute gone comes back again, take heed and see ye nothing do in vain”. Words we would all do well to take on board – though perhaps that piles on the pressure a bit too much (I’d have to give up doing this for a start). 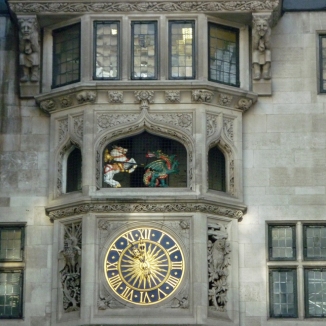 On the way down Kingly Street we circle round each of Foubert’s Place, Granton Street and Tenison Court before stopping off at the Sadie Coles Gallery at no.42. It’s a nice space so always worth a visit (if only for the view over Regent Street). 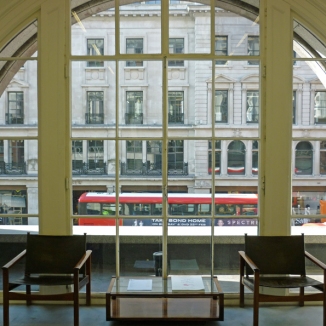 Reaching Beak Street we turn left and back north up Carnaby Street. I don’t expect anyone still imagines this retains any of the (overstated even then) glamour of its sixties heyday but it is still always a bit of a jolt to see just what a nondescript shadow of its former self it now is. About as “swinging” as Basingstoke or The Voice.

This mural, on the corner of Carnaby Street and Broadwick Street is entitled Spirit of Soho. It was created in 1991 by the Free Form Arts Trust and  St Anne, dedicatee of the local church, enveloping depictions of various characters and aspects of life from Soho’s history beneath her voluminous skirt. A more recent addition to the local artistic environment is the “light sculpture” Sherida Walking which was installed as part of January 2016’s  Lumiere London event (and kept as the one permanent reminder of that). It was created by artist Julian Opie, probably best known for his design of the cover of Blur’s “Best of…” album. 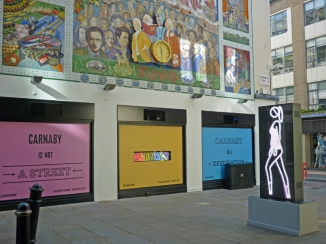 More or less opposite this is Kingly Court, a mini-mall of 21 restaurants and bars described by the Evening Standard last year as “the Carnaby Street enclave that’s fast becoming central London’s hottest foodie destination”. I draw attention to it merely on account of the fact that I am perpetually gobsmacked by the number and variety of eating establishments that London seems to manage to support. As if there weren’t enough things to do more interesting than stuffing your face ? 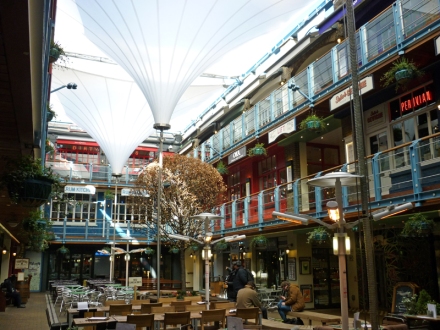 At the northern end of Carnaby Street (actually no.29 Great Marlborough Street) is the Shakespeare’s Head pub which was built in 1735 and owned originally by Thomas and John Shakespeare, reportedly distant relatives of the great man himself. The pub’s inn sign is a reproduction of Martin Droeshout’s  contemporary portrait of Shakespeare. The life-size bust which appears to be gazing out of a window is missing a hand, lost in a WW1 bombing raid. 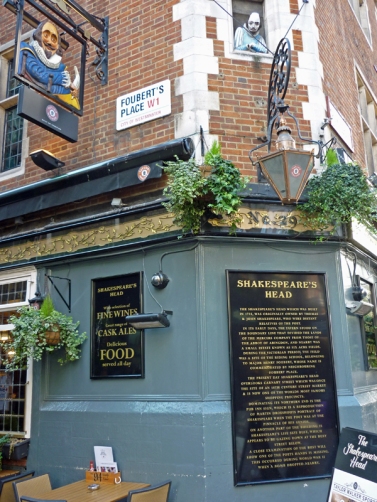 Turn the corner and we’re back at Liberty department store which is always a pleasure to visit. I could wander round here for hours (and I don’t like shopping). Mind you I can’t remember the last time I actually bought anything. 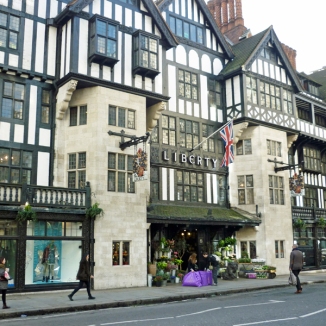 The Liberty Store was founded by Arthur Lasenby Liberty in 1875 and started out on a site in Regent Street. The mock-Tudor style building in Great Marlborough Street was completed in 1924. Designed by Edwin T. Hall and his son Edwin S. Hall, the store was constructed from the timbers of two ships: HMS Impregnable and HMS Hindustan. The frontage is the same length as the Hindustan. Designed at the height of the 1920s fashion for Tudor revival, the shop was engineered around three light wells, each surrounded by smaller rooms. Many of these rooms had fireplaces – some of which still exist today. If you’ve never been inside you can get an idea from the images below. The weathervane is an exact model of the Mayflower which took the pilgrims to the New World in 1620.

Hopefully you managed to spot the sneaky “selfie-of-the-day”. And what about those lifts ? Outrageous. Nor surprisingly Oscar Wilde was a fan “Liberty is the chosen
resort of the artistic shopper.”

Across the road from Liberty is Ideal House (now known as Palladium House) constructed just a couple of years later from polished blocks of black granite, ornamented with enamel friezes and cornices in yellows, oranges, greens and gold. The black and gold colours were the colours of the American National Radiator Company (whose building in Manhattan inspired this design for their London HQ).

A little way further east along Great Marlborough Street we turn left into Ramilies Street where we find the Photographer’s Gallery, which moved here a few years ago from its original home, a converted Lyon’s Tea Bar adjacent to Leicester Square tube station.

Since its inception in 1971 the Photographer’s Gallery has been the only public gallery in London specialising in the presentation and exploration of photography as an art form. In its new home it has three separate galleries and the three current exhibitions – which run to 3 April 2016 – are all definitely worth a look. These are – a retrospective of the work of Saul Leiter, a collection based around the 1916 Easter Rising in Ireland and (my personal favourite) an installation by Brazilian artist Rosângela Rennó which presents images from the salvaged archives of Uruguayan photojournalist Aurelio Gonzalez using 20 scavenged analogue projectors. The slide show below features the last of these.

After leaving the PG we turn left into Ramilies Place and then a dog-leg into Hills Place takes us practically back to Oxford Circus. Well I did say it was a short one.