Back on the east side again with a sizeable trek that starts off on the edge of the City of London, where we were a few weeks back, on Norton Folgate. We then tour the streets either side of Commercial Street (a.k.a the Commercial Road), taking in Spitalfields Market (both Old and New), before doing a circuit of Liverpool Street station and the various Broadgate developments that surround it.

The area immediately to the east of Bishopsgate and north of Spitalfields market is on the frontline of the battle between City developers and conservationists and after a long-running struggle it looks as though the former have gained the upper hand with Boris Johnson green-lighting the Blossom Street office development in January 2016. This could mean the end for the historic Victorian-era warehouses that inhabit the space between Folgate Street and the west side of Blossom Street.

Turning right onto Fleur de Lis Street and then north on Elder Street takes us out onto Commercial Street. 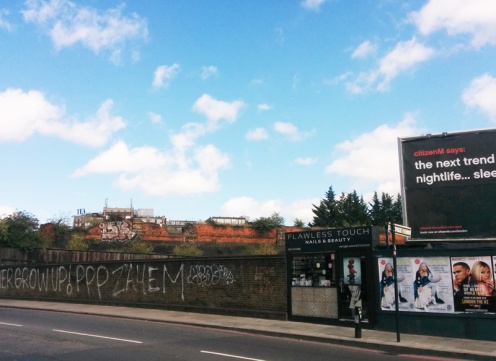 Returning west on Fleur de Lis we turn left onto the southern stretch of Elder Street where many of the terraced properties from its origin in the 1720’s are still intact. Among these are nos. 19 & 21 which are both listed. In the doorway of the former still just visible painted lettering proclaims the leasehold of a straw-chip dealer named Troake and a printer named Leghorn. 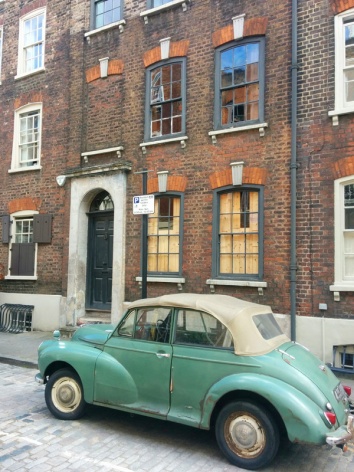 Across the street at no.32 is a blue plaque commemorating the residence here of the painter Mark Gertler (1891 – 1939). Gertler was unrequitedly in love with his fellow artist, Dora Carrington, who was equally devoted to the gay author Lytton Strachey. In 1939 Gertler took his own life just seven years after Carrington had herself committed suicide. His most famous work is probably Merry-Go-Round painted in 1916.

Turn left onto Folgate Street again and then branch off down Lamb Street which emerges on the north side of Spitalfield market. Head back west and reach Spital Square, home to gourmet French restaurant Galvin La Chapelle which occupies a former Victorian chapel.

Doubling back we take a turn round Bishops Square which was created as part of the 2005 Spitalfields regeneration programme. During the excavations the remains of a charnel house (repository for human bones) dating back to the 14th century were uncovered. These remains have been preserved as part of the development beneath a glass pavement.

Return eastward on Lamb Street where the open-air food stalls are preparing for lunchtime business then about-turn again to enter into Old Spitalfields Market. Spitalfields takes its name from the hospital and priory, St. Mary’s Spittel that was founded in 1197. The origins of a market on this site go back to the years immediately following the Great Fire of 1666; then in 1682 Charles II granted another of his charters – this time to one John Balch, giving him the right to hold a market for fresh produce here on Thursdays and Saturdays. After several decades of success the area went into decline from the 1820’s onward and it was only when a former market porter called Robert Horner bought a short lease on the market, and started work on a new market building which was completed in 1893 at a cost of £80,000, that its fortunes recovered. The City of London took control of the market in 1920 and it continued to prosper. By the end of the 1980’s however the same congestion issues that forced the closure of Covent Garden resulted in the removal of the fruit and veg market to Leyton further out east. Following this the aforementioned regeneration programme was embarked upon (not without a good deal of controversy). Nowadays, the Old Market continues as a mix of temporary stalls with mainly a vintage/arts & crafts flavour whereas the New Market, further west in the redeveloped section and surrounded by chain restaurants, is filled with permanent stalls with more of a fashion and design feel.

Having arrived back in Bishops Square we turn east again down Brushfield Street. Beyond the southern side of the street the City’s relentless eastern march is in full swing though a few of the 18th century buildings are holding their ground. Despite appearances this one below is home to yet another coffee shop. 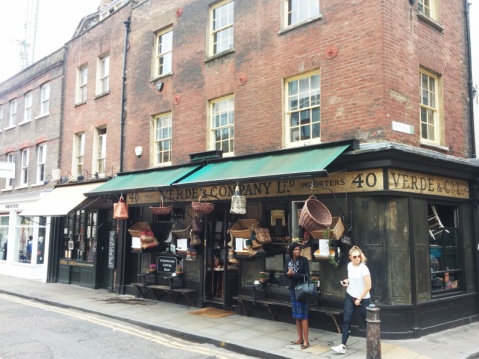 As we continue up Brushfield Street with the market to our left Nicholas Hawksmoor’s imposing Christ Church looms ever closer. This Anglican church, built between 1714 and 1729, was another product of the “Commission for Building Fifty New Churches” created by a 1711 act of parliament (we have already encountered other examples of these in our previous travels though only twelve were actually built). Christ Church is probably the finest of these twelve with its impressive Tuscan columns out front and its soaring Gothic steeple. A major restoration of the interior of the church, begun in 2000 and completed in 2004, removed nineteenth- and twentieth-century alterations and reinstated the original arrangement of galleries, returning them to something as close as could be established to Hawksmoor’s original design. In 2015 the Crypt was also restored and converted into a cafe area. The organ which was originally installed in 1735 was the largest in England at the time with over 2,000 pipes.  After it fell into disuse and disrepair in the 1960’s the organ’s parts were removed for safe-keeping during the restoration project. Following its own restoration it was reassembled in the church in 2014.

The monuments on either side of the altar recess are to Edward Peck and Sir Robert Ladbroke respectively. The former was one of the Commissioners who authorised the building of the church and the latter was a one-time Lord Mayor of London. When I visited the church was manned (if that’s the right word) by an Indian lady called Ava Bose who showed me a programme advertising Billy Graham’s crusade appearance in Victoria Park in 1996 when she shared a platform with him (I suspect she shows it to most visitors).

Continue east away from the church down Fournier Street. This area saw the arrival of many of the Huguenots driven out of France following the 1685 edict of Nantes (which featured in one of the Leicester Square posts). The Huguenot silk weavers were followed by a later wave of Irish weavers in the mid 1700’s and then from 1880 onward an influx of Jewish migrants fleeing the pogroms of Eastern Europe. The current population of the area is of largely Bangladeshi origin. 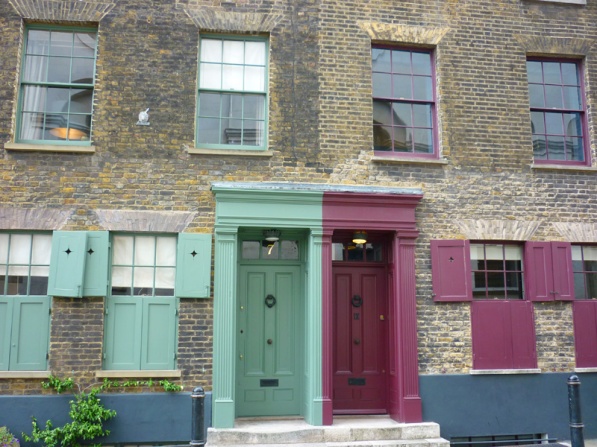 Turn north on Wilkes Street and stop off at Puma Court to take a look at some Victorian almshouses built in 1860. 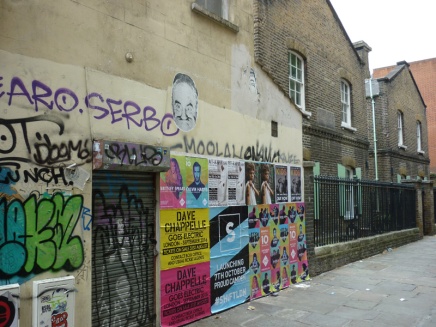 At the end of Wilkes Street, on Hanbury Street, is the Old Truman Brewery. A brewery was originally established here around 1666 and the Truman name arrived a decade or so later when one Joseph Truman took control of operations. Under the guidance of Joseph’s younger son, Benjamin (who inspired the Ben Truman brand), the brewery expanded rapidly to become one of the largest in London. Growth both organically and through acquisition continued under subsequent generations and by 1873 Truman had become the largest brewery in the world. Nothing lasts forever though and in 1971 Truman lost its independence when it was taken over by the conglomerate, Grand Metropolitan, and shortly thereafter merged with Watney Mann. A switch into keg beer in the late seventies and early eighties combined with a growing consumer preference for lagers proved to be the undoing of Truman and the brewery eventually closed in 1989. In a bizarre case of things turning full circle though the Truman brand name was bought from Scottish & Newcastle in 2010 by two London businessmen who opened a new micro-brewery in Hackney Wick producing a range of cask ales. The brewery site itself has over the last twenty years been turned into a centre for the arts and creative and media industries with gallery spaces, restaurants and independent retail outlets. 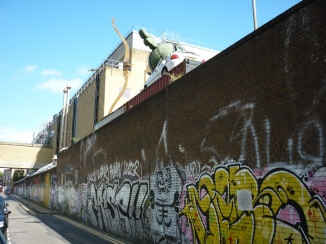 Head north up Corbet Place and then Grey Eagle Street which flanks the brewery (see bottom right above). Turning left onto Quaker Street there are three blocks of buildings which were put up by the Great Eastern Railway Company in 1890 in order to rehouse those whose homes had been demolished to accommodate the expansion of Liverpool Street Station. These buildings currently lie derelict (for how much longer) but like many other spots in the vicinity have provided a ready canvas for the local street artists. As have the walls on either side of Wheler Street and Braithwaite Street which combine to link Quaker Street with Bethnal Green Road.

Retracing our steps back underneath the railway we enter the southern section of Wheler Street passing Bedford House. This Grade II listed building was built in 1894 to house the Bedford Institute, named in honour of Peter Bedford, a Quaker philanthropist and silk weaver who formed the Society for Lessening the Causes of Juvenile Delinquency. The institute moved out in 1947 and the building was converted for industrial use as a warehouse and bottling plant for E.J.Rose & Co Ltd, wholesale suppliers of spirits and wine. When they too left in the late eighties the building was empty for more than 20 years before squatters moved in 2011 followed shortly after by an artists’ collective from Berlin. Despite the group carrying out restoration work on the building and the owner, reputed to be in the UK top ten rich list, seemingly having no plans of his own, they were evicted after only four months. The building still lies empty a further five years on.

Next we take a left down Calvin Street and then follow Jerome Street round to rejoin Commercial Street.

Cross over and take a second stroll down Folgate Street, past Dennis Severs House at no. 18 – a museum recreating the world of he 18th century Huguenot silkweavers. Arriving back on Bishopsgate head south briefly then turn west down Primrose Street. Almost immediately swing north again and cut through one of soulless new developments that cluster around Liverpool Street Station – all tinted glass and Pret A Manger. This brings us out onto Worship Street where we turn left and then swing round into Appold Street. From here we do a circuit of Snowden Street, Vardy Street, Finsbury Market, Clifton Street and Pindar Place to bring us back round to Exchange Square which sits on the site to the north of Liverpool Street Station which until 1986 was occupied by Broad Steet Railway Station. By that time only around 6,000 passengers a week were using this outpost of the North London Line so there was every imperative for British Rail to cash in by selling the site. The station was the inspiration for Paul McCartney’s 1984 album and film of the same name Give My Regards to Broad Street. Whether or not this contributed to the closure is open to conjecture. Exchange Square is a popular lunchtime destination for many of the thousands of workers in the surrounding offices and during the winter hosts an ice rink. 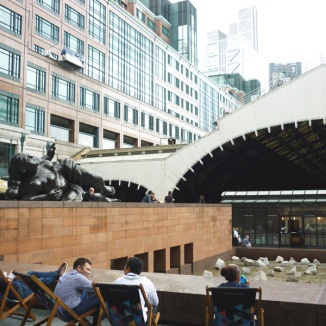 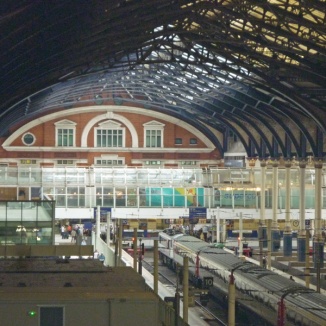 Cut through the eastern section of the Broadgate development and we’re back on Bishopsgate and turning right to cover the hundred metres or so to the eastern entrance of Liverpool Street Station. The station was fully opened as the new London terminus for the Greta Eastern Railway in 1875. When I used to travel from here to University in Norwich in the late Seventies and early Eighties it was (like most London mainline stations at the time) not somewhere you would want to linger for any length of time. The major redevelopment of the station was begun in conjunction with the Broadgate project (see above) and completed in 1991. Oddly this didn’t include an electronic departure display boards but a new mechanical “flapper” model that was the last of its kind when finally replaced in 2007 (by the one you see below).

After traversing the concourse we emerge on the western side in Sun Street Passage then nip round into Broadgate Circle which used to be home to the ice rink that has now moved to Exchange Square but nonetheless remains a “dynamic food, drink and leisure offering to the City” (according to the Broadgate website).