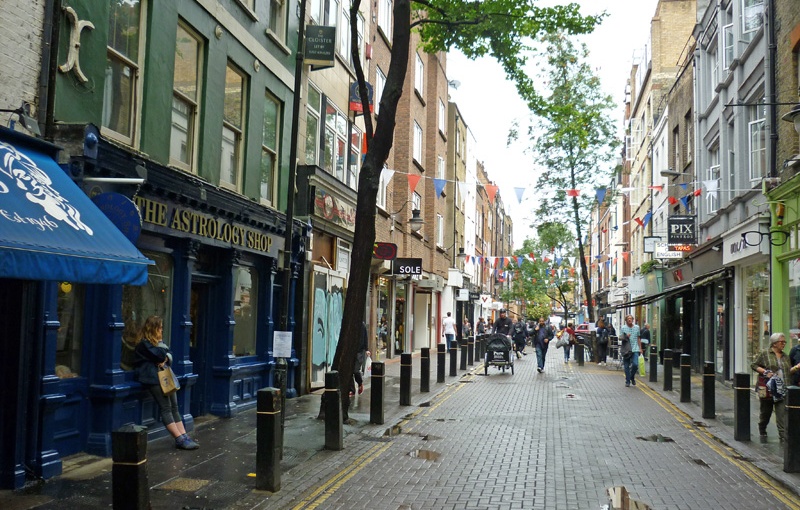 Today’s jaunt starts out at Leicester Square tube and ticks off all of the streets that radiate out from Seven Dials before looping eastward round the back of the Royal Opera House and circumnavigating the tourist inferno that is Covent Garden piazza. Passing just the odd theatre or two along the way. A wealth of material to cover on this trip so it’s another one split into two posts. 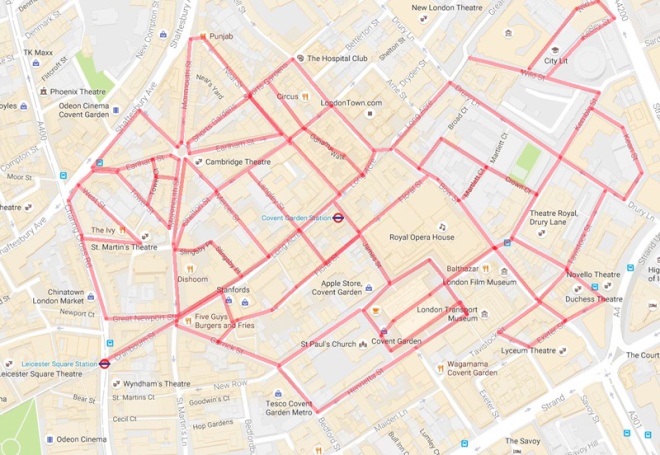 First up is Cranbourn Street then a return to Charing Cross Road via Great Newport Street. Here at nos. 10-11 is a green plaque marking the fact that this was home to trad jazzman Ken Colyer‘s Studio 51 basement jazz club in the Fifties. Not quite as wild as Studio 54 but the concept of the all-nighter did probably take root here for the first time as far as the UK is concerned. 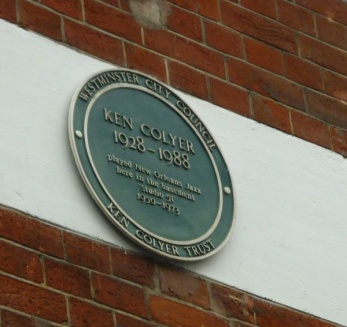 Charing Cross Road has historically been known for its second-hand and antiquarian bookshops. Fortunately there are still a few of these hanging on, though no.84 which inspired an eponymous book of 1970 that was made into a 1987 film starring Anthony Hopkins and Anne Bancroft hasn’t housed a bookshop since the late sixties. It’s now a MacDonald’s. 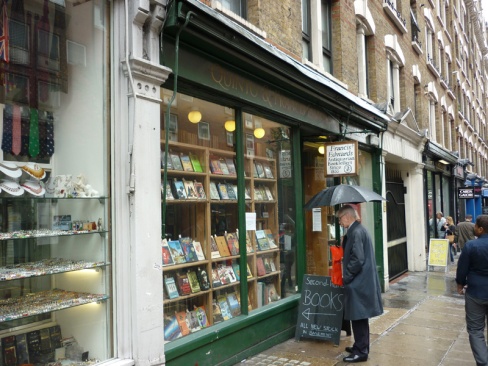 Turning right down Litchfield Street brings us to St Martin’s Theatre which has been home to The Mousetrap for the last 42 years of its record-breaking 64 year unbroken run on the West End stage. It first became the longest-running show in British theatre history as early as 1958. During its entire run 442 actors and actresses have appeared in the play, there have been 256 understudies (including one 15 year stint), 142 miles of shirts have been ironed and over 500 tons of ice cream sold. Of course the ending of the play is the worst kept secret in the world of stage – everybody knows that the big red plastic colander thing falls on top of the mouse. 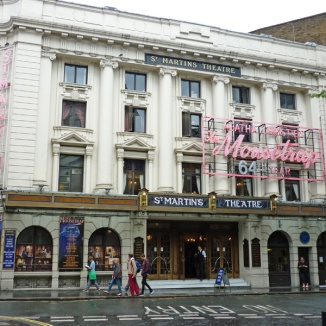 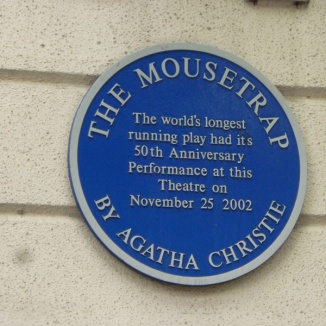 Just opposite the theatre is The Ivy, a restaurant that has long been something of a cliché as a lunchtime rendezvous for luvvies and their agents. The Ivy was created in 1917 by Abel Gandolini and Mario Gallati and the name was inspired by actress Alice Delysia who, quoting a popular song of the day, told the pair “Don’t worry, we will always come to see you, we will cling together like the ivy” when Gandolini’s original cafe closed for work to begin on the new venture. 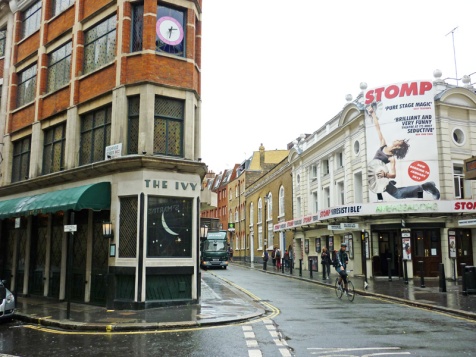 Next we head up to Shaftesbury Avenue via West Street passing another theatre, the Ambassadors, en route. This one has been around since 1913 and played host to The Mousetrap for the first 21 years of its run up to 1973 when it moved a few yards down the street. The aforementioned French actress and singer, Alice Delysia (1889 – 1979) appeared in revue here regularly during the WW1 years and the theatre later witnessed the stage debuts of both Ivor Novello and Vivien Leigh.

Turn briefly on to Earlham Street then fork right down Tower Street and when this merges into Monmouth Street head north up the latter for the first of several visits to Seven Dials. 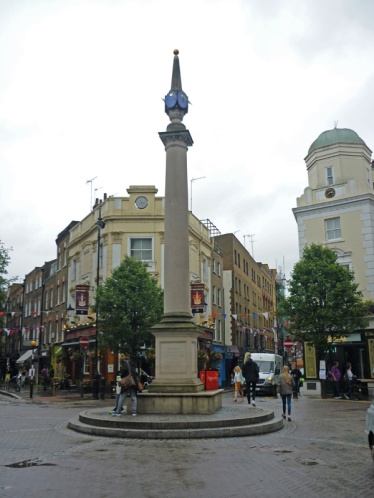 As its name implies, Seven Dials is the hub of seven different streets and was the brainchild of Thomas Neale, MP in the early 1690s. He devised the idea of laying out the area in a series of triangles to maximise the number of houses; as rentals were charged per foot of frontage and not per square foot of interiors. Neale commissioned England’s leading stonemason, Edward Pierce, to design and construct the Sundial Pillar you see above as the centrepiece of his development. Unfortunately for Neale the area didn’t become the fashionable address he had hoped for and rapidly degenerated into a slum renowned for its gin houses. At one time each of the seven apexes facing the monument housed a pub and all their basements were connected for ease of escape in the event of a raid. Sadly, only the 19th century Crown (see above) remains.

Back along Earlham Street then continue north-east along Shaftesbury Avenue past the Chinese Church in London which was born out of a prayer meeting of Chinese Christians held on Christmas Eve 1950. 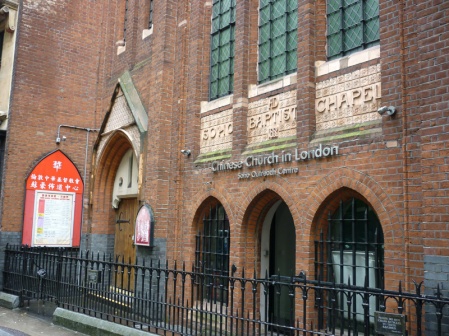 Return to Seven Dials via Mercer Street and arrive opposite the Cambridge Theatre ( I did warn you). This is one of a number of theatres that opened in 1930 and had an original capacity of 1,275. It has had something of a chequered history including a couple of stints as a cinema and an ill-fated 1984 reinvention as a soi-disant Theatre of Magic called the Magic Castle which lasted just a year. The current production of Matilda, which has been here since 2011, and its predecessor, Chicago, which ran for eight years represent a welcome upturn in fortune. 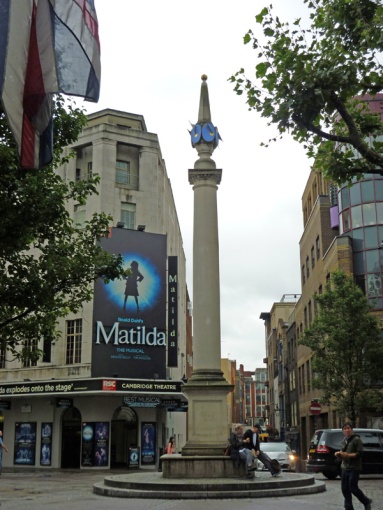 Head back north on the upper stretch of Monmouth Street stopping en route to visit Neal’s Yard, named after the aforementioned Thomas, which has been the home of alternative medicine, occultism and astrologers, attracted by the sundial and the symbolic star layout of the streets,since the 17th Century. Not very well hidden in the bottom right picture below are at least six signifiers of poncey Metropolitanism that will have anyone living north of Watford Gap frothing at the mouth. 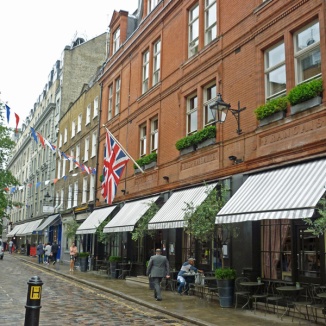 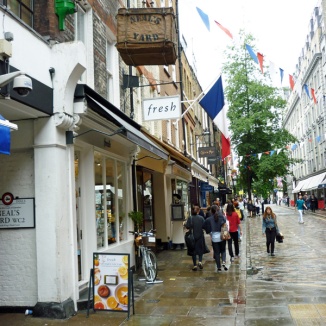 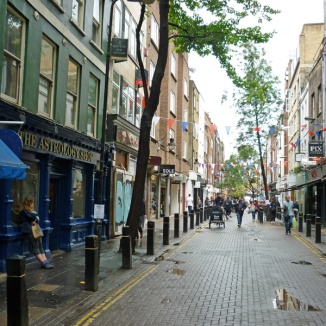 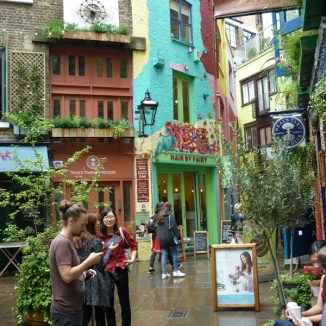 Swing right into Neal Street and half way down turn right again down Shorts Gardens and find ourselves back at Seven Dials. This time we leave by the eastern section of Earlham Street (roughly 3 0’clock on the dial) which is where you’ll find a theatre of a different stamp in the Donmar Warehouse. The Donmar is a 252 seat not-for-profit theatre that has been staging innovative and much-acclaimed productions of both classic and contemporary plays for the last 24 years. Despite its size it’s attracted stars like Nicole Kidman (The Blue Room), Jude Law (Hamlet) and Tom Hiddleston (Coriolanus) to tread its boards over the past decade. 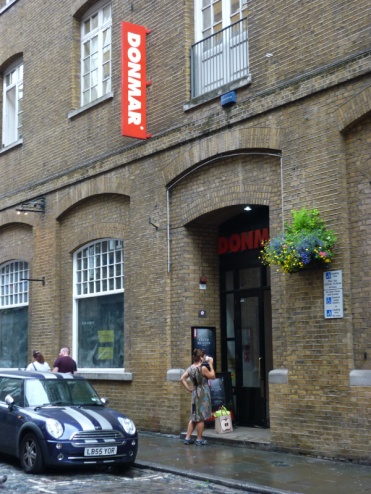 Emerge onto Endell Street by the Cross Keys pub which was mentioned a few posts ago. This time I pop in for a quick half and have to endure the blaring of some new London-based golden oldies radio station. Christ knows why these things are so popular – in the Seventies we weren’t subjected to non-stop segues of forty-year old Gracie Fields and George Formby records in the way that Billy Joel and Queen are forever polluting the airwaves of today. 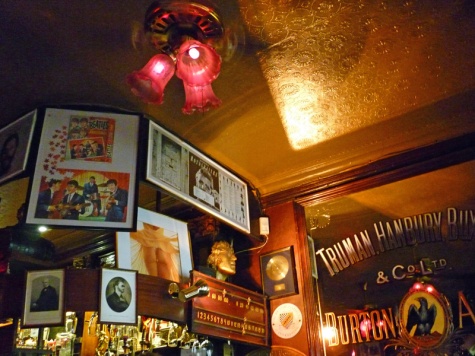 Across the road is the building where the firm of Lavers, Barraud and Westlake produced stained glass windows between 1855 and 1921. 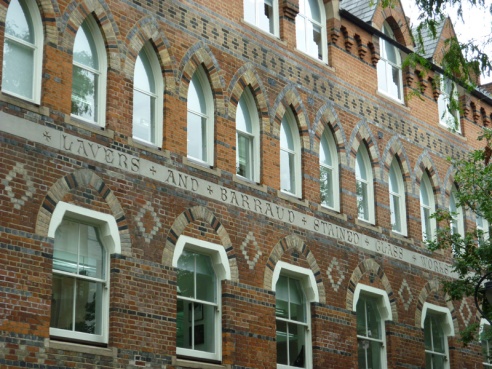 Return westward next along Shelton Street and make a quick detour up and down Nottingham Court before resuming as far as the bottom of the middle section of Mercer Street and nipping up this to get back to Seven Dials for one final time. From here it’s back down Monmouth Street which morphs into Upper St Martin’s Lane before hitting Long Acre. Heading east here we pass across the road from Stanfords, the self-proclaimed premier map and travel bookshop in the world, which has been trading from this site since the start of the last century. In 1941, during one of the biggest raids on the capital, Stanfords was hit by an incendiary bomb which all but destroyed the top two floors of the building. However, the thousands of Ordnance Survey maps stocked by the shop in tightly constructed stacks helped halt the path of the flames and saved the rest of the shop from destruction. Subsequently, in a business move which his grandfather, the founder of the company, would have been proud of, Fraser Stanford continued to sell these maps withe their charred edges for years afterwards. 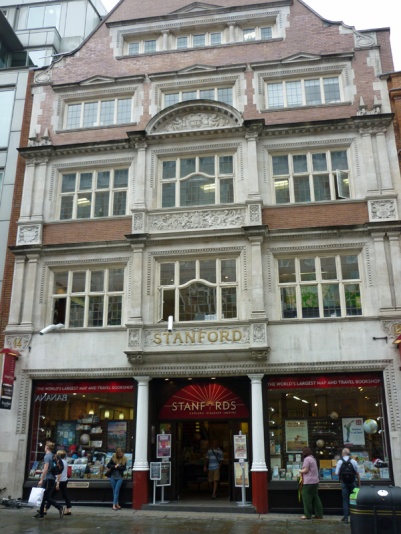 Next up we loop round Slingsby Place back to Shelton Street then turn south again on the bottom stretch of Mercer Street back to Long Acre. From this point we traverse between Long Acre and Shelton Street using Langley Street, the lower part of Neal Street and Oddhams Walk before continuing east along Long Acre as far as the top of Drury Lane which is where we’ll leave things for now…