Today’s route involves a first trip to the two most expensive properties on the Monopoly Board, Park Lane and Mayfair via the underside of Oxford Street, the Marble Arch gyratory system and the eastern edge of Hyde Park. It also takes in that little bit of central London which is all about the US of A, Grosvenor Square. 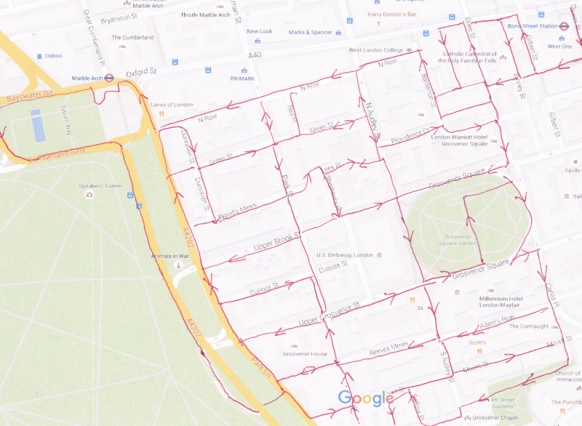 Start at Bond Street tube station and immediately venture south down Davies Street where on the intersection with South Molton Lane we find the Grosvenor Works, which is now occupied by Grays Antiques but was from the late 19th century home to John Bolding & Sons makers of sanitary appliances (bathroom fittings in other words).

Turning right along Weighhouse Street there is another reminder of London’s industrial and commercial past – this United Dairies signage on a building currently undergoing redevelopment. United Dairies effectively ceased to exist in 1959 when it was merged into what became Unigate – so this must have at least been obsolete for longer than I’ve been around.

Up Gilbert Street and down Binney Street where, sandwiched between this and Duke Street, is the former King’s Weigh House Chapel which nowadays operates as the catchily-entitled Ukrainian Catholic Cathedral of the Holy Family in Exile. Designed by the eminent Victorian architect, Alfred Waterhouse, the chapel’s original name derives from the fact that its dissenter congregation’s original place of worship, in Eastcheap, was above the office for checking the weight of merchandise. 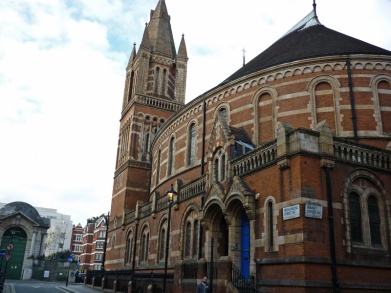 Head up Duke Street to Oxford Street again and then down Lumley Street (no sign of Joanna) to arrive back west of the church in Brown Hart Gardens. The eponymous gardens in the middle of this square are laid out on a raised terrace and replaced the original communal street level gardens which made way for the construction of what must be one of the world’s grandest electricity substations at the turn of the last century. The substation was completed in 1905 to the design of C. Stanley Peach in a Baroque style from Portland stone featuring a pavilion and steps at either end, a balustrade and Diocletian windows along the sides to light the galleries of the engine rooms. The overlaying of a paved Italian garden was carried out at the insistence of the then Duke of Westminster.

The gardens have very recently been renovated and the terrace is now, like every other tarted up bit of the capital, graced with a posh café. The western end of the square is occupied by another five-star hotel – the Beaumont.

We now head north on Balderton Street and turn left into North Row, which runs parallel with Oxford Street and has nothing of interest to detain us until we reach Marble Arch. Pause at the corner of Park Lane to note the detailing on the southern exterior of the Cumberland Hotel where Jimi Hendrix kept a room in the late sixties and which now has a suite (though not the same one) named in his honour. 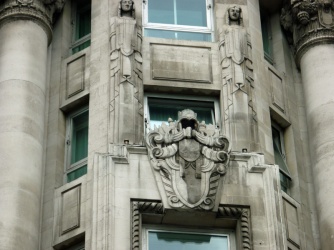 Cross the road to take a closer look at Marble Arch itself. This was originally designed by our old friend John Nash to be one of the state entrances to Buckingham Palace but was relocated in 1851 upon the widening of Park Lane and now sits isolated and underwhelming amid the traffic visited only by hordes of pigeons and a few less discerning tourists. 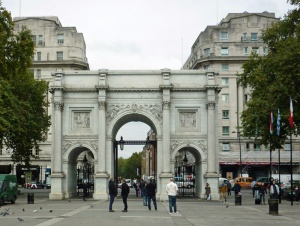 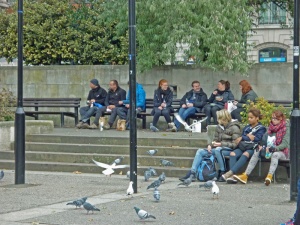 Yes, if you were wondering where all the pigeons went after being driven away from Trafalgar Square here’s your answer. As a consequence the sign in the photo below which exhorts members of the public to keep the area clean is a perfect exercise in futility. The statue you can see in the far distance is a very recent addition to the area. The work, called ‘She Guardian’, comprises four tonnes of bronze, sculpted over two years by Russian artist Dashi Namdakov. Unfortunately (or perhaps not) its positioning means only the hardiest tourist (or pigeon) will ever get close enough to experience its true majesty. 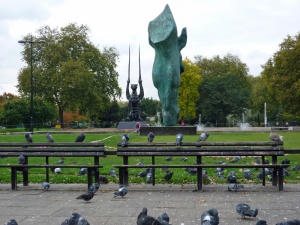 These little guys have even gone so far as to hide away down a disused subway entrance to escape its awesome majesty. 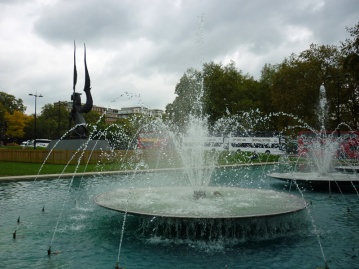 We make our escape too; skirting round Cumberland Gate to enter Hyde Park at Speakers’ Corner. In accordance with an 1872 act of parliament anyone can still turn up unannounced to speak on any subject, as long as the police consider their speeches lawful. Though on this particular day no-one had made the effort. 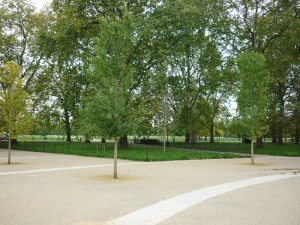 Dodge the joggers and cyclists en route through the park to exit by the Joy of Life fountain, a 1963 creation of T.B Huxley-Jones. Take the subway under Park Lane to emerge on the edge of Mayfair by Mount Street. On this stretch of Park Lane we have at no.93 the Grade I listed former London residence of Disraeli from 1839 to 1872. And at no. 100 the Grade II listed Dudley House, one of the few surviving aristocratic private palaces in London. It didn’t exactly come as shock to learn that this 17-room mansion is now owned by a member of the extended Qatari royal family. 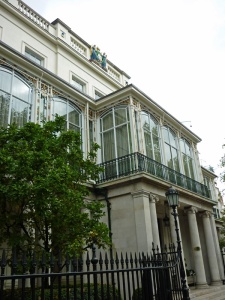 For the next stretch of the walk we weave in and out of Park Lane and the parallel running Park Street which isn’t exactly short of high-end apartment blocks.

No. 16 on the interconnecting Upper Grosvenor Street was once the residence of Sir Robert Peel. Although he served twice as Conservative Prime Minister in the 1840’s Peel was one of the great political reformists, playing a key role in the repeal of the Corn Laws, Catholic emancipation and the 1832 Reform Act by supporting the Whig government from the opposition benches. Such Liberal tendencies have not exactly endeared him to certain elements of subsequent generations of Conservatives. His best-known legacy is probably the creation of the Metropolitan Police and the designation of its members as either “Peelers” or “Bobbies”. 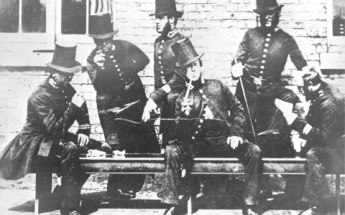 Culross Street, Upper Brook Street, Woods Mews and Green Street are the other interlinking streets. The second of these is home to Michael Roux Jr.’s Michelin two-star, Le Gavroche at no. 43. 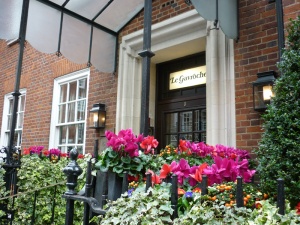 Reaching the top of Park Lane again we cut back down Dunraven Street where no.17 announces itself as the former home of the immortal P.G Wodehouse. There are very few surer ways of fending off a bout of the glums than a good dose of Jeeves and Wooster. If you’re not familiar with the radio adaptations featuring the late greats Richard Briers and Michael Hordern I urge you to seek them out. 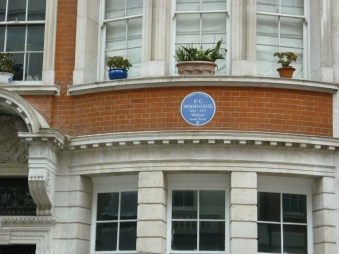 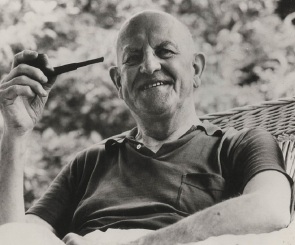 Continue via Lees Place and Shepherds Place to North Audley Street where at no.13a we find the former St Mark’s Church. Dating from 1828 and designed in the (by now familiar) Greek revival style the building ceased to be a parish church over 30 years ago and after an long period of abandonment and aborted re-usage attempts is now re-branded as One Mayfair and owned by the same events company that previously brought you One Marylebone. The adjacent red-brick No. 13 was originally the vicarage and is still today used as a private home. 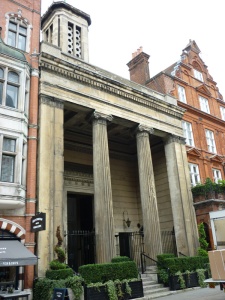 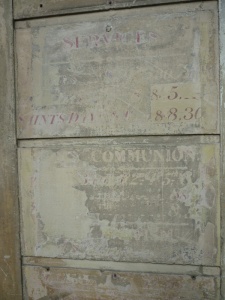 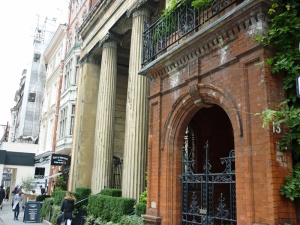 Nearby Providence Court provides a prime example of the vogue for redevelopment that involves propping up historic frontages and completely rebuilding behind them.

George Yard takes us back to Duke Street from where it is a short hop to Grosvenor Square. As already noted this is dominated by the monstrous incongruity that is the American embassy. Chap with his hands on his hips is Dwight Eisenhower. He’s joined at the southern end of the building by Ronald Reagan whose statue was unveiled in 2011. I suppose the thinking was that the one was a hero of the Second World War and the other of the Cold War, though the equivalency escapes me. 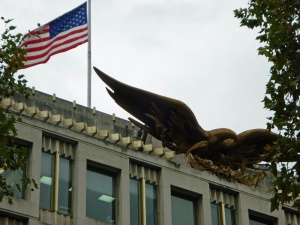 Pride of place in the gardens in the centre of the square goes to a statue of Franklin D. Roosevelt and on the eastern side there is a pavilion and memorial garden created to honour the victims of September 11. The building in the background is the significantly more discrete Italian Embassy.

Leave the square via Carlos Place which is the location of the Connaught Hotel and also the Timothy Taylor gallery where one of the works in the current exhibition provides today’s selfie of the day. 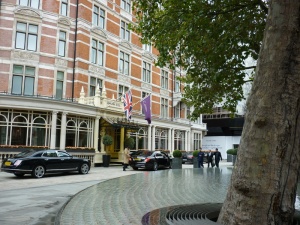 Duck through Mount Street Gardens, created in 1889 out of a former burial ground, passing the rear of the Jesuit Church of the Immaculate Conception before entering onto South Audley Street. Here we find the 120-year old Mayfair Library which is still just that, a public library run by Westminster Council. It’s quite difficult to imagine any of the residents of this part of town popping in to borrow an actual book so perhaps it’s not surprising that the library has expanded its services to include offering itself as an approved venue for wedding ceremonies. 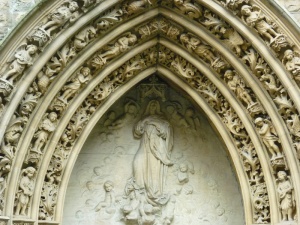 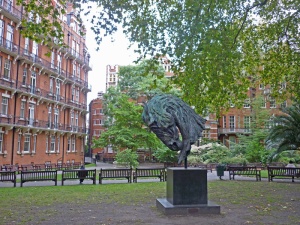 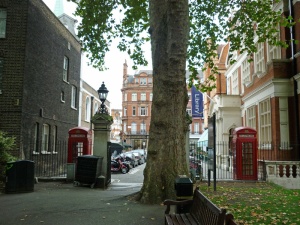 Opposite the library is the Grosvenor Chapel which was built in the 1730’s and whose Anglican congregation was swelled during the Second World War by the presence of American servicemen and women. 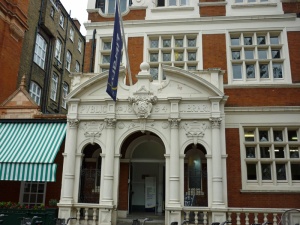 South Audley Street is also, at no. 57, home to James Purdey and Sons, Gun and Rifle makers by Royal appointment. Still no sign of Joanna (tenuous cultural cross-reference of the day).

Right, we’re nearly done now. Aldford Street and Rex Place bring us back to Mount Street and a stretch which is the location of the Brazilian Embassy proper and a swathe of high-end boutiques and restaurants (which in fairness the buildings do deserve). 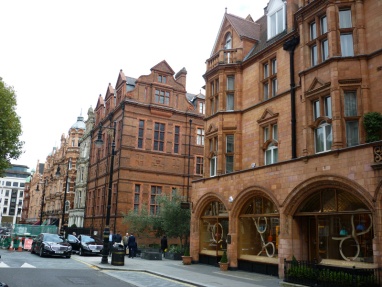 Finish off with Adams Row, Reeves Mews and then Grosvenor Street where the final pause of the day is to clock the embassy of the Principality of Monaco at no.7. Not quite sure why they feel the need for an embassy as most of their residents will be too scared to visit London in case they get asked to pay some tax (God forbid!)