Today’s route sees us heading north again to cover the area around Euston Station starting in the locality of Somers Town which bridges the gape between Euston and Kings Cross. We then head across the Euston Road encroaching into Bloomsbury before finishing off in the streets surrounding University College London.

From Euston Station we head north along Eversholt Street which is somewhat reminiscent of the vicinity of Kings Cross before it was tarted up. Though it does have the impressive 1930’s built Euston House at no.24, originally the HQ of the London, Midland and Scottish Railway it later became the home of the British Railways Board (now of fond memory).

Further up it looks more like this. I don’t think I’ve seen one of those multi-coloured plastic strip curtains since about 1981. Interesting to note that the misused apostrophe isn’t a particularly modern phenomenon – though whoever put this up has obviously hedged their bets. 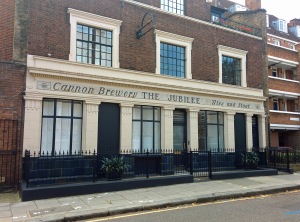 Turn eastward along Polygon Street where at no.16 is the site of the  the former Jubilee pub closed in 2003 but nice to see the splendid frontage still in situ. We are now venturing into Somers Town which like the area immediately east of Regents Park still has a good stock of social housing and a bit of an old-school community feel. Right down Werrington Street and left along Pheonix Road and we hit Ossulton Street which heading south flanks the new British Library.

The site just to the north of the library is supposedly being redeveloped as the Francis Crick Institute, intended to be one of the largest medical research centres in Europe. I say supposedly because the poster below proclaims an opening in 2015 and as you can see from the other photo there’s still basically just an empty space. 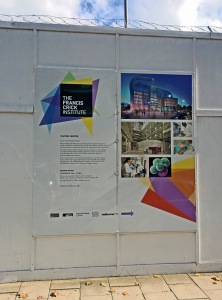 Quick right onto Euston Road and back northward on Chalton Street, a pleasingly tree-lined thoroughfare with an interesting mix of retail and hospitality outlets. Including one with a secret garden – though it’s obviously not that secret once you advertise it on your billboard. 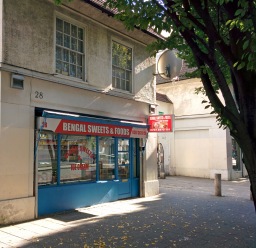 Drummond Crescent, Doric Way, Churchway and Grafton Place complete the set of streets east of Euston and somewhere amongst these is this rather novel storage solution.

Then we’re back out by the supremely unlovely Euston Station from where heading east along Euston Road we pass the headquarters of the Unison Trade Union at no. 130. 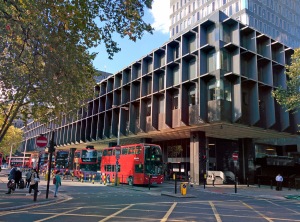 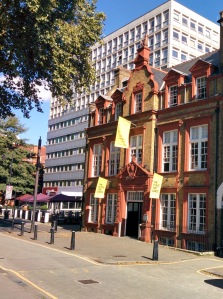 Cross over Euston Road and skirt round the back along Flaxman Terrace which segues into Dukes Road where we find The Place, home of contemporary dance.

Opposite is the back entrance to the imposing neo-classical St Pancras New Church. Built in 1819–22 to the designs of William and Henry William Inwood; the most impressive features of this Grade-I listed building are the two tribunes on either side of the eastern end with their four terracotta caryatids modelled on those at the Erechtheum in Athens. 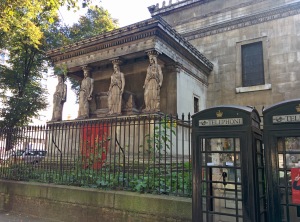 Inside the entrance to the church is a plaque commemorating a family of worshippers who were amongst those lost when the Steamship City of Boston sank en route from Halifax, Nova Scotia to Liverpool in 1870.

The crypt, which extends the whole length of the church, was designed to contain 2,000 coffins, but fewer than five hundred interments had taken place by 1854, when the practice was ended in all London churches. It served as an air-raid shelter in both world wars and is now used as an art gallery. The kinetic installations in the pictures below are the work of Irish-French artist Malachi Farrell.

Running parallel to the south side of the church is the self-consciously quaint Woburn Walk which trumpets its Georgian origins along with the facts that WB Yeats is a former resident and Dickens used to buy his tobacco here. It’s a popular location for anachronistic TV and advertising shoots most notably episodes of Poirot. As you can see it’s not all about the past – the future is catered for as well, if you dare seek to know it ! 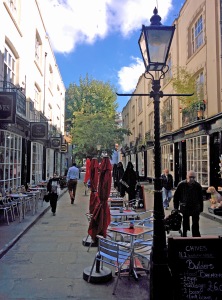 Moving back westward along the south side of the Euston Road we pass Friends House, the Quakers’ top joint, before reaching the Wellcome Collection. This is part of the Wellcome Trust, founded in 1936 by the munificent Henry Solomon Wellcome as a global charitable foundation dedicated to improving health. As well as its permanent collection of medical-related artefacts the Collection also puts on regular free artistic and historical exhibitions. If you’re quick you can still (up until 18 October) catch the work of Alice Anderson who has “mummified” an astonishing array of items using layers of thin copper wire. 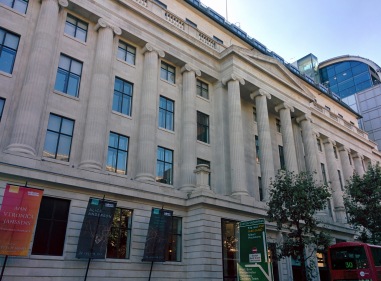 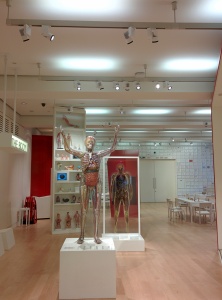 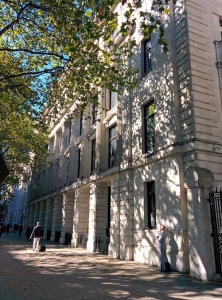 Crossing on to the north side of Euston Road we encounter the headquarters of the Royal Society of General Practioners, yet another grand London edifice at the disposal of members of the medical profession.

From here we head back north along Hampstead Road before doubling back down Cardington Street then turning onto Drummond Street, which used to be wall-to-wall Indian vegetarian restaurants but now only has a couple left. Cobourg Street adjoins Starcross Street where we pause at the pub of the day, the Exmouth Arms, for a pint and a burger (though not your actual Juicy Bastard I’m sorry to say).

North Gower Street leads back to Drummond Street and on the corner of this and Melton Street sits one of those red-tiled disused former tube stations. This was one of two separate tube stations built to service Euston just after the start of the 20th century. This one, which was part of the Charing Cross, Euston and Hampstead Railway was only in use from 1907 to 1914 when both the original stations were closed (though the other one did reopen in the twenties). The current Euston underground station dates from 1968 like the Victoria Line on which it sits. 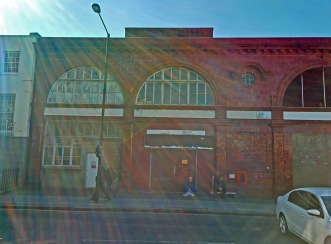 We turn right onto Euston Street and then circle back to the station via Stephenson Way where I completely (and perhaps aptly) fail to spot the (Harry Potter-ishly named) Centre for the Magic Arts which is the home of the Magic Circle. I guess they must keep it shrouded in some kind of invisibility cloak during the daytime..

At the Euston Road entrance to the station can be found the last remnants of the original station which was built in the 1830’s and demolished (surprise, surprise) in the 1960’s. The two lodges which originally flanked the grandiose Euston Arch (despite being Grade-II listed this failed to survive the redevelopment) are now in use as bars. The war memorial in the background below also made it beyond the decade of destruction.

Turning south again on Upper Woburn Place we find the home of the British Medical Association ( I refer you to my earlier comment). This photo doesn’t do it justice and I’ve missed off the plaque noting that Dickens (him again) lived on this site for ten years or so from around 1860. On the upside what’s not to like about those trousers ?

We arrive at Tavistock Square which encircles and eponymous garden whose centrepiece is this statue of Mahatma Gandhi, sculpted by the Polish artist, Fredda Brilliant (real name), and installed in 1968 ( as big a year round these parts as it was in Paris seemingly). 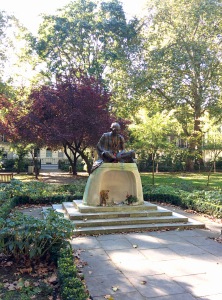 Via Endsleigh Street, Endsleigh Gardens and Taviton Street we reach Gordon Square. This is now firmly within the bailiwick of Bloomsbury as evidenced by the plaque at no 50. celebrating the whole Bloomsbury set and another at no.51 dedicated to Lytton Strachey (1880 – 1932) alone. Thankfully I managed to avoid the recent TV series on the set and I won’t dwell on them here though I suspect they will crop up again in a subsequent post.

More interestingly, no.46 was home to the great economist John Maynard Keynes (1883 – 1946) from 1916 until his death. In 1999, Time magazine included Keynes in their list of the 100 most important and influential people of the 20th century, commenting that: “His radical idea that governments should spend money they don’t have may have saved capitalism.” As we know just nine years later that idea came into its won once more.

On the other side of the square is Dr Williams’ Library. The gardens in between are much frequented by students of University College London whose campus occupies a large site to the west of Gordon Street and a smaller one to the east. 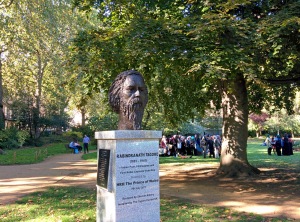 So large in fact that bypassing it takes us, via Gower Place and Beaumont Way, all the way back to Warren Street tube and the end of today’s journey. 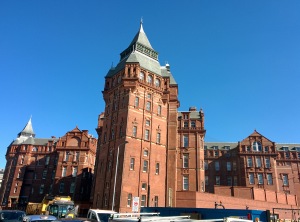