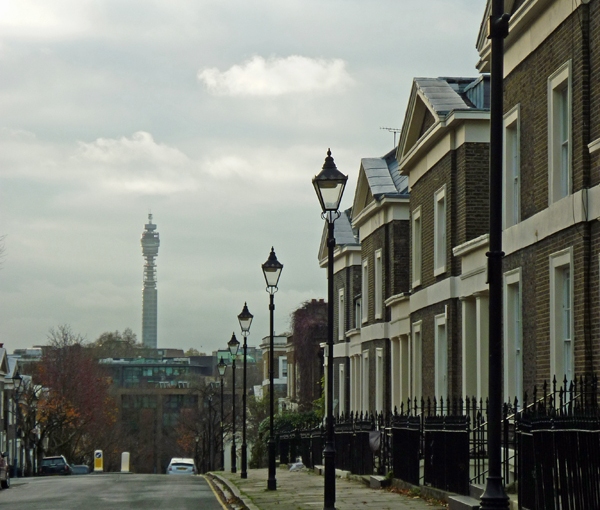 Bit of a meandering one today, largely covering the triangular area bounded by King’s Cross Road, Pentonville Road and Roseberry Avenue then returning to Gray’s Inn Road and ending up at the Charles Dickens Museum. Much of this area is comprised of the site known as New River Head which is integral to the story of London’s water supplies. This trip also takes us for the first time into the London Borough of Islington.

Begin within a return visit to Kings Cross and take the Scala on the corner of Pentonville Road and King’s Cross Bridge Road as the starting point. Originally opening as a cinema in 1920, the Scala has had many incarnations including a brief ill-fated stint in the late seventies as a Primatarium (a specially made-up word I suspect). This monkeying around lasted all of 18 months before the venue reverted to being a cinema and also hosting live music performances. That continued until 1993 when the Scala Cinema Club went into receivership after losing a court case over an illegal screening of Stanley Kubrick’s A Clockwork Orange. After a radical make-over it was resurrected in 1999 as a concert and club venue. Unfortunately the building is completely swathed in scaffolding for repainting at present. 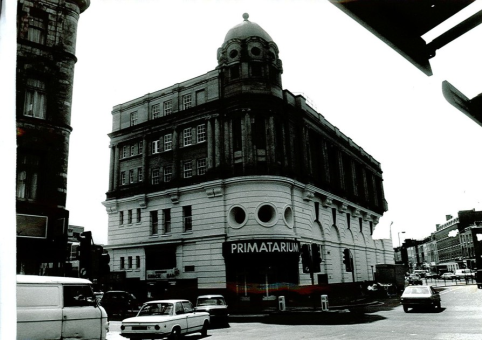 Cut through onto the top end of Gray’s Inn Road where the familiar un-tarted up Kings Cross lives on.

On the opposite side of the road is Willing House, now a Travelodge but originally built around 1910 in a ‘Free Baroque’ style for the Willing family, whose fortune was founded on billboard sites.

The streets which intersect between Gray’s Inn and King’s Cross Road have little of real interest but the photos below give some flavour of St Chad’s Place, Field Street, Leeke Street, Swinton Street, Wicklow Street and Britannia Street.

One thing of note on Wicklow Street is this indication that the Royal National Throat, Nose and Ear Hospital isn’t that keen on taking on any additional patients.

After that lot it’s back out onto King’s Cross Road and a break for lunch; finally catching up with the vogue for Vietnamese Banh Mi rolls (after everyone else has moved on no doubt).

Cut up onto Pentonville Road again via Lorenz Street then back down Weston Rise and up Penton Rise. Somehow it’s never really registered with me before that a Rise is so-called because it does just that. On the west side of this incline is the 1960’s GLC built Weston Rise Estate which is garnished at its southern end by a somewhat incongruous tropical garden. 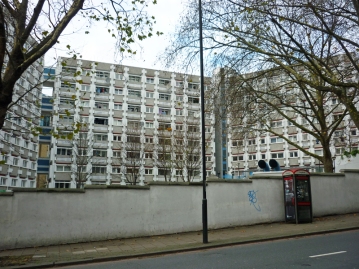 On the other side is Vernon Square, home to Kings Cross Baptist Church and behind which is another SOAS campus.

Heading further east along the Pentonville Road brings us to Claremont Square in the middle of which is the eponymous reservoir originally dug at the start of the 18th century then covered in 1855 following The Metropolis Water Act of three years earlier, prompted by the cholera epidemic of 1846, which required this of all reservoirs within London. The reservoir fell into disuse in the 1990s, but came back into service in 2003 to provide a kind of header tank or balancing reservoir for the London Ring Main

Claremont Close loops off the square and then Mylne Street leads off the south-east corner down to Myddleton Square. This, the largest square in this part of London, is named after Sir Hugh Myddleton  one of the main architects of the New River project – of which more in a minute. In its centre sits St Mark’s Church, Clerkenwell, consecrated on 1st January 1828. The church is unusual in that there is no graveyard in its grounds. The congregation have also shared the church with the World Community for Christian Meditation since 2002.

Having circumvented the square, Ingelbert Street takes us into Amwell Street and then River Street returns us to the square from where Myddleton Passage cuts through to Arlington Way. Here we emerge opposite the west side of Sadler’s Wells Theatre on Roseberry Avenue, London’s premier contemporary dance venue. The current building which opened in 1998 is the sixth theatre on this site; the first erected in 1683. Current offering is Matthew Bourne’s “Sleeping Beauty” which I can thoroughly recommend.

Immediately to the west of Sadler’s Wells is the area known as New River Head which derives its name from being the site of the mouth of the New River, the channel cut at the start of the 17th century to supply London with water from springs out in Hertfordshire. This was all carried out under the auspices of the New River Company which became a very substantial property owner over the next couple of centuries before being taken over by the Metropolitan Water Board in 1904. It was the latter which constructed the Laboratory Building (below) in 1938 as a home for the testing of water quality. This archetypal 1930’s creation was converted to residential use in the 1990’s. 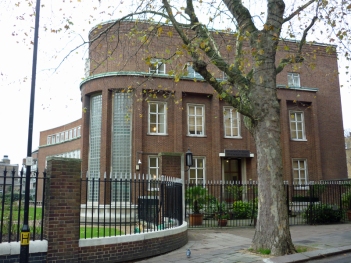 On the apex of Roseberry Avenue and Hardwick Street sits the equally impressive New River Head Building which was opened in 1920 as the headquarters of the MWB. This also succumbed to conversion into luxury private residences in the nineties.

Hardwick Street leads into Amwell Street again and crossing over into Merlin Street we find Charles Rowan House  with its distinctive turrets and atypically Expressionist feel. This was originally built in the 1920’s as married quarters for Met policemen and was converted into council housing in 1974.

Next up is Wilmington Street, then Fernbury Street and Naoroji Street (named after Dadabhai Naoroji (1825 – 1917) the so-called “Grand Old Man of India” and the first Asian to sit as a British MP). A bit more of Amwell Street then left into Lloyd Baker Street and right into Lloyds Street. The elevation comes into its own here with this view across to the BT Tower in the west.

From Great Percy Street we dip back into Amwell Street then loop back via Cruikshank Street and Holford Street. Cumberland Gardens and Prideaux Place are the next stops before arriving at Percy Circus. Like Great Percy Street, this takes its name from Robert Percy Smith, Governor of the New River Company from 1827 to his death in 1845. It is also the least central of the London Circuses. At No. 16 is yet another blue plaque commemorating a brief residency of Lenin. 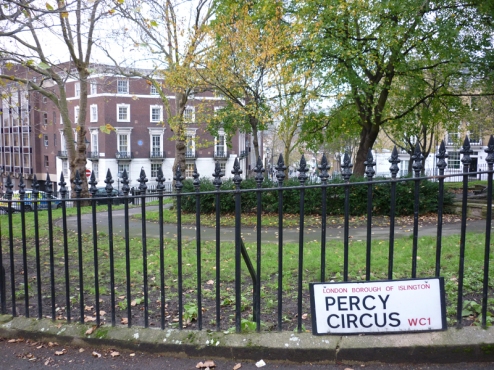 Next down Vernon Rise back to King’s Cross Road and again zig-zag between this and Gray’s Inn Road taking in Acton Street, Frederick Street, Ampton Place, Ampton Street, Cubitt Street, Pakenham Street and Wren Street. This brings us to St Andrews Gardens opposite which on GIR is the London Welsh Centre – a hub for Welsh cultural activities in the capital not a rugby player.

Just a bit further up the road is the old Kings Cross telephone exchange with its distinctive blue façade.

Wander down to Doughty Street to  rendezvous with final stop of the day, the Charles Dickens Museum at no.48. Dickens only lived in this Georgian terraced house from 1837 to 1839 but two of his daughters were born here. it was where he wrote Oliver Twist and it also sadly witnessed to the death of his 17 year old sister-in-law. The museum first opened in 1925 and, as you would expect, is home to the world’s most important collection of Dickens memorabilia, including the writing desk you see below. To be honest I can’t say it was the most scintillating museum experience I’ve ever had – perhaps I should have waited a week for the Christmas decorations to go up.