Today’s route covers the area to the west of Tottenham Court Road and North of Oxford Street and takes in most of the rest of Fitzrovia. Back in the 90’s some genius tried to re-brand this area as “NoHo” but there was NoHope of that succeeding despite the prevalence of media businesses. Most well-known thoroughfare is probably Charlotte Street; once renowned for its many Greek restaurants. It appears sadly that those have all gone now (I guess plate-smashing and austerity aren’t a good mix), replaced by clutch of high-end eating establishments – all doing great business on a Friday lunchtime.

A lot of this post will focus on the compact but fascinating Pollock’s Toy Museum in Whitfield Street – more than worth £6 of your hard-earned if you’re ever in the vicinity. 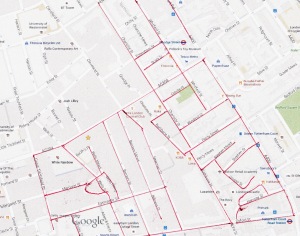 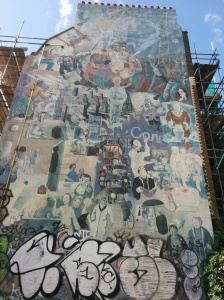 We begin at Goodge Street tube station just adjacent to which in Whitfield Gardens can be found the Fitzrovia Mural depicting life in the area at the start of the 1980s.

Head north up Tottenham Court Road then turn left into Grafton Way and again into Whitfield Street. At no.108 is Marie Stopes House, former home of the lady herself.  Marie Charlotte Carmichael Stopes (1880 – 1958) led a very colourful and varied life and although her fame today rests on her pioneering work in the field of birth control she was also (and first) a renowned palaeontologist. 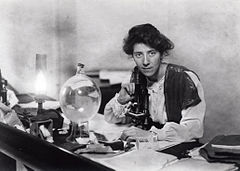 The address of the aforementioned Pollocks Toy Museum is actually 1 Scala Street but it does front onto Whitfield Street. 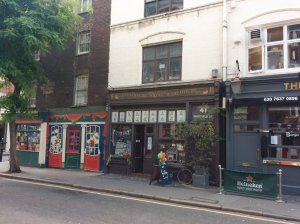 The museum’s collection mainly focuses on Victorian toys with a particular interest in model theatres and dolls but as you can see below there is plenty of nostalgia prompts for us kids of the sixties and seventies.

The following two items greatly intrigued me. I wasn’t previously aware that Snakes and Ladders originated as a game used for Hindu religious instruction. Apparently it represents the journey of a soul towards heaven with the ladders rewarding good deeds and the snakes punishing evil ones. The unfortunately named Plopitin looks like some weird 1930s forerunner of swingball. If you’ve got a £150 spare there’s one currently going on ebay 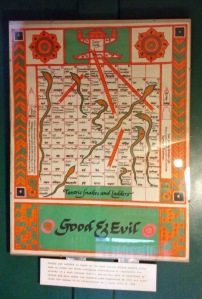 Just about my favourite things though were these two prints which are facsimiles from 1883 editions of the Victorian publications, the Girl’s Own Paper and the Boy’s Own Paper. At the end of each paper was as section which printed replies to correspondence received from readers – the letters themselves were never published. I’d urge you to take a closer look at these because they are supremely amusing. 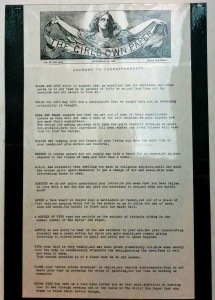 I can’t believe I’m alone in finding dolls like these incredibly creepy. As for the Russian Matryoshkas I’m ok on the smaller ones at the front but having trouble identifying the three at the back. Looks to me like there are two alternative Gorbachevs. 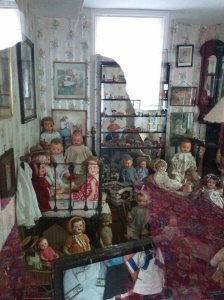 Anyway moving on…At the end of the street is Lewis Leathers, proclaimed as Britain’s oldest purveyors of motorcycle clothing. I thought it was the motorcyclists that wore the clothing but that may be just me being pedantic. Inadvertent crap selfie of the day. 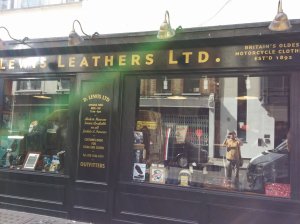 Above right is the charmingly out-of-context Colville Place which cuts between Whitfield Street and Charlotte Street. This is home to the Movie Poster Art Gallery which also features original artwork for LP sleeves such as this one for the brilliant A Certain Ratio’s Sextet album from 1982. If you’re unfamiliar with ACR then I strongly suggest that you Spotify them.

I’ve already mentioned Charlotte Street and its culinary delights. It’s also home to Saatchi & Saatchi of which the less said the better probably. Quick mention of the Darren Baker gallery which currently has an interesting selection of work on display and where the assistant was atypically friendly.

On to Goodge Street and then in succession, Tottenham Street , Goodge Place, Charlotte Place and Newman Passage.

No 15. Percy Street was for a time the residence of actor Charles Laughton (1899 – 1962). No matinee idol, Laughton is probably best known for his portrayal of the Hunchback of Notre Dame though he also starred in Mutiny on the Bounty and The Barretts of Wimpole Street (see previous post). Nowadays his acclaim, as far as film buffs are concerned, rests on his solitary directorial effort, the startling Night of the Hunter. 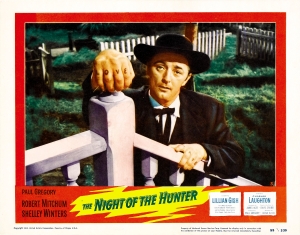 Next door at No.14 lived (though not contemporaneously) the poet, Coventry Kersey Dighton Patmore (1823 – 1896) about which nothing was quite as interesting as his name.

On the corner of Charlotte Street and Windmill Street is the famous Fitzroy Tavern which is unfortunately closed for major refurbishment until 2016 which means that the pub of the day is the nearby Rising Sun, quite possibly the last unreconstructed boozer in the vicinity. Which means that there are free tables and who can argue with just over a tenner for a pint of Czech lager and a plate of ham, egg & chips. 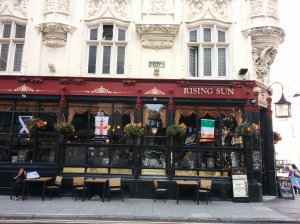 Had I hung on till I got round the corner into Rathbone Place I could have drunk in the footsteps of Dylan Thomas and George Orwell in the Wheatsheaf,

Stephen Street is home to the British Film Institute and in Gresse Sreet is the grandly named Fashion Retail Academy (where you can learn how to flog frocks in Next).

Duck back down onto Oxford Street and up Hanway Street leading to Hanway Place. On the former lies Bradleys Spanish Bar which is for my money the best drinking place within coughing distance of Oxford Street and one of the few bars that still has a working jukebox. 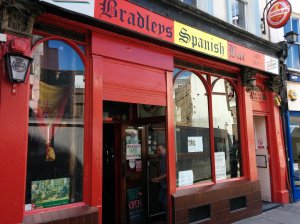 North again on Newman Street and into Mortimer Street. The architecturally striking Radiant House occupies nos. 34-38 though there seems to be a dearth of information about its origins.

At No. 10 Berners Street is the 5 star Edition Hotel (part of the Marriott Group). The building dates from 1835 and the site has been a hotel since 1904, simply the Berners Hotel in its previous incarnation. 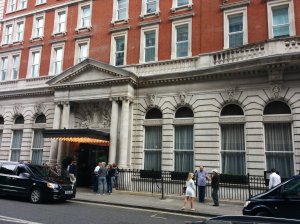 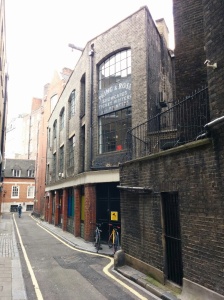 Back up Wells Street and veering off down Marylebone Passage (above right) takes us on to Margaret Street where on opposite sides you have the Fo Guang Shan Buddhist temple (south side) and All Saints Church (north side). The former (Grade II listed) was originally the parish school attached to the latter and dates from the mid 19th century.

All Saints was completed in 1950 and, designed by the architect William Butterfield, is one of the landmark buildings of the Gothic revival. 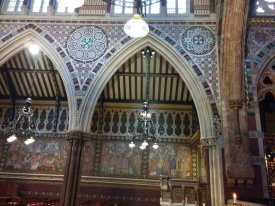 The church has recently undergone renovation work which shows off the impressive decorative tiling and paintwork to fantastic effect. 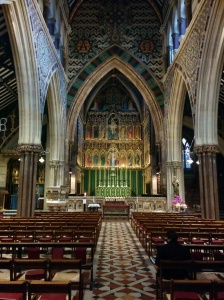 Next up is Riding House Street home to the College of Naturapathic Medicine where presumably one student has the same effect as several thousand.

Eventually arriving back on Oxford Street via the already familiar Great Titchfield Street we emerge opposite Marks & Spencer which opened here in 1938 occupying the former site of the London Pantheon which in its various incarnations since 1772 served as a theatre, opera house, bazaar and wine merchants. The present building, in iconic art deco style, was designed by by Robert Lutyens (son of Sir Edwin Lutyens) and was granted Grade II listed status in 2009. 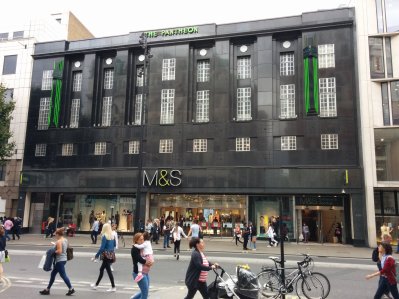